Despite his cordial relationship with “nicest guy ever” Steven Siler, Lance Palmer knows he’ll be putting that aside at the PFL championship on New Year’s Eve.

New York, NY — Lance Palmer has been at the top of this game for while now. In the World Series of Fighting, he was a two-time featherweight champion. In the PFL, he was perfect through the regular season and playoffs, even managing to avenge a loss against old rival Andre Harrison. Now, Palmer has a shot at the featherweight title in the PFL.

The spoils awaiting the victor of his championship fight against Steven Siler aren’t too shabby either. A million dollars. With all that on the line it’s a good thing that Palmer is confident heading into the bout on New Year’s Eve.

“If you don’t think you’re going to get to this level, you probably aren’t. So the confidence level is definitely there,” Palmer told media outlets including Cageside Press on Saturday, when the PFL 11 open workouts went down. A lot of that confidence stems from Palmer being so active in 2018, a benefit of the tournament format. “I feel that being more active, more than anything else, has helped. When you’re not active, you get stagnant. With the WSOF, I would only fight once or twice a year. Being able to fight four times, going on five within a six month period is really good for my learning curve, and everything else. It’s been great.”

At PFL 11 Palmer (16-3) is once again competing in a rematch. That’s been a theme of his career thus far. Alexandre Almeida. Andre Harrison. And now Siler. Who Palmer is very familiar with.

“He’s like the nicest guy ever. He really is. We have a good relationship,” Palmer said in regards to his opponent. “I’ve known him for years. He fought my old teammate Chad Mendes back in the day at Tachi Palace Fights at the beginning of Chad’s career. I’ve known him for a really long time, we have mutual friends in Utah.”

Siler has trained with Ramsey Nijem, “who’s a really good friend of mine,” Palmer continued. “All those guys we’ve been friends with, we’ve known for years and years. Steven Siler isn’t somebody that’s new to me, just as an opponent. I’ve known him since way before, I fought him last year, we have the same manager. We’ve known each other for a while, we have a decent relationship.”

“Obviously we’re cordial, but when it comes to fight night, we’re going to throw down.”

Asked how Siler has improved since their first meeting, Palmer told Cageside Press that “It’s hard to tell because his very first fight of the season, he got dropped right away. That guy’s [Magomed Idrisov] not very good on the ground, so he was able to get that finish right off the bat.” Palmer then recalled that Siler’s second fight “was a weird finish because Alemida didn’t tap, and he didn’t go out. And the ref stopped that fight. So that was kind of weird too.”

“The third fight against Malegarie I didn’t really pay attention to that one,” Palmer continued, “just because I was fighting the same night. He won the first round then lost the second round, I believe. But the first round was the one who went on, as long as there wasn’t a 10-8. Then the fourth fight was kind of a controversial no contest kick to the fact, on the ground or whatever.”

“I know he’s improved, it just hasn’t really shown much in his fights, honestly,” Palmer finished.

Lance Palmer meets Steven Siler for the second time at PFL 11 on December 31, 2018. Going down at the Hulu Theater at Madison Square Garden in New York City, the card airs live on NBC SN, and Facebook Watch internationally. 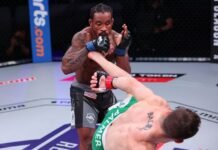 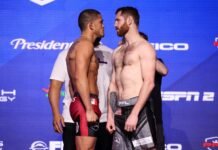