In addition to the six title fights at PFL 11, former Olympic gold medalist Kayla Harrison will be fighting for the third time and is bringing a new era of mixed martial arts with her.

New York, NY – Harrison is one of the hot commodities of PFL. The league plans on building a women’s lightweight division around the judoka next year and will be holding a 155-pound tournament. Along with broadcasting opportunities, Harrison is serving as a brand ambassador and has fully embraced her new sport with a pair of finishes in the PFL cage.

At the PFL 11 open workouts, Harrison used her timeslot to give a judo lesson (a clip of which can be seen below) then spoke to media afterward.

Harrison faces Moriel Charneski on New Year’s Eve, and Harrison knows there’s more to her opponent than her sub-.500 record.

“She’s a tough opponent, she’s game, she’s never been finished. She has more experience than me, she has seven fights. That shows me that she’s tough, but my goal is to win in the first round by TKO, KO, or submission. I want to be the first to put her away. I want to end the year with a bang.”

Harrison made headlines at the PFL 11 press conference when she claimed, “The baddest woman on the planet is sitting right here.” Of course, that was before her teammate Amanda Nunes knocked out Cris Cyborg at UFC 232. However, she was still able to clarify the comment at the workouts:

Starting a new career after having such a successful life in judo is an exciting prospect. Kayla Harrison is jumping in fully and embracing MMA. The problem is that it’ll take time to get to the level she wants to be.

“Patience is not one of my virtues. I think what’s been so difficult for me is that I was so successful in judo and I started when I was six, so it took me 20 years to get to that point. For the last 10 years of my judo career, I was on top and knew that I could overcome anything, but here, I’m still so new. I have so much to do, so much to learn with such little time. My coaches have to slow me down and tell me, ‘you don’t have to train five times a day. It may take a year but you’re going to learn how to strike, you’re going to learn how to move your head. We have faith in your ability as an athlete and your ability to learn, so relax.'”

A great benefit to PFL that all fighters have been preaching is the lack of downtime. The fighters have a set schedule and aren’t held to the whims of matchmakers. This is incredibly beneficial for a fighter like Harrison who wants to gain as much experience as she can.

“If it were up to me I’d fight every month. Success breeds success and once you get going on that train you can’t stop… With the tournament going on next year, I think I’ll get to fight six times, which is awesome. You can’t get that anywhere else. In other organizations, you fight once and they sit on you for six months.”

As mentioned earlier, Kayla Harrison is training with American Top Team alongside the now legendary Amanda Nunes. She had her choice of any gym, but ATT is the right one for her in her eyes.

“Every day I feel like I get a little bit better and that’s what’s so exciting for me at this point in my life. In judo, by the end of my career, I was so burnt. I was doing the same thing over and over again. You can only perfect something so much before you reach the top. With this, every single day I’m learning something new. With everyone at American Top Team, I feel like the sky is the limit. I work on striking every day in some way, shape, or form. I have a great corner, I have a great team, and I get to train with the best in the world.”

Harrison explained that the feeling of winning an MMA fight is that of winning a judo bout times 1000. She added that she never truly loved judo, she was just in love with winning. MMA also provides her with more opportunities for exposure, which she said that she could use to champion women’s rights.

Kayla Harrison vs. Moriel Charneski goes down December 31 at the Hulu Theater at Madison Square Garden. The card airs live on NBCSN and Facebook Watch internationally. 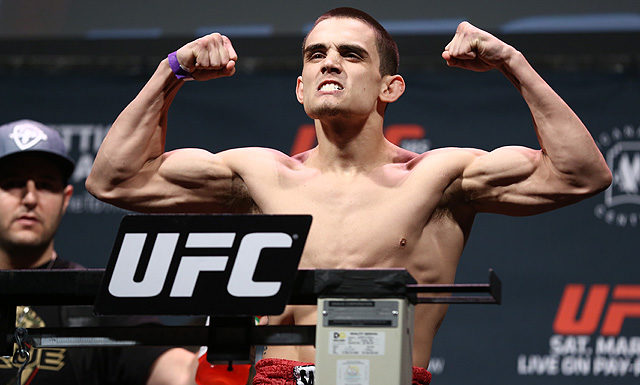 UFC Fight Island 1: Dan Ige Surprised, but Respects Calvin Kattar for Fighting Down in the Rankings