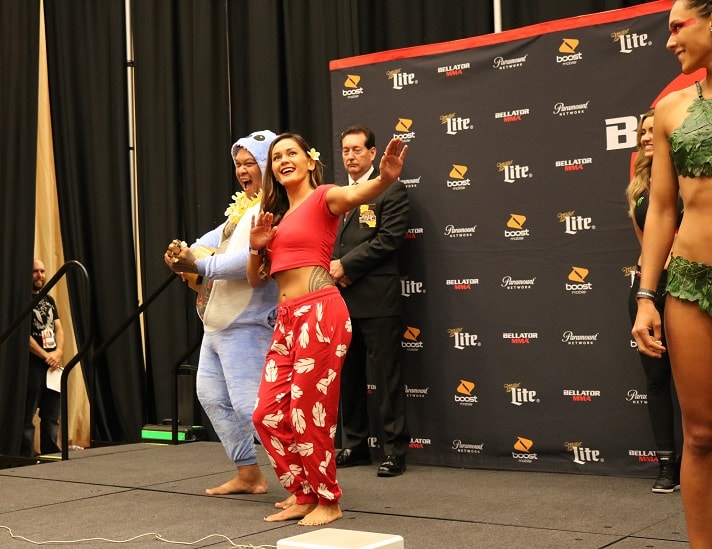 Bellator 213 caps off a busy weekend of combat sports with a flyweight title fight in the main event, and Cageside Press has their picks set.

The Bellator 213 main event features Ilima-Lei MacFarlane defending her flyweight title for the second time against former UFC title challenger Valerie Letourneau. MacFarlane is undefeated at 8-0, submitting her last three opponents. This will be her first fight in her home state of Hawaii. Letourneau’s UFC career ended unceremoniously, losing three in a row. However, fighting in her more natural weight class at 125 pounds has made a difference, as the Canadian is 2-0 since signing with Bellator. All but two writers (who happen to be from Canada) picked the champion, MacFarlane.

The co-main event features former UFC champion Lyoto Machida against former Bellator champ Rafael Carvalho. While Machida won in his last two Octagon appearances, he elected to go elsewhere when his contract expired. This will be his promotional debut. Carvalho successfully defended the middleweight title three times before falling to the great Gegard Mousasi in his last fight. All but one writer picked “The Dragon.”

Two of the promotion’s more impressive homegrown names square off in King Mo Lawal and Liam McGeary. King Mo has been dabbling in RIZIN, winning their heavyweight grand prix, and falling to eventual champion Mirko Cro Cop in their openweight grand prix. Stateside, he’s won two of three, losing to Ryan Bader most recently. Liam McGeary was once a phenom, but has fallen off since winning the title. The Brit has won just once in his last four fights and is looking to snap a two-fight losing streak. Just one writer sided with McGeary.

Opening up the Bellator 213 main card will be a pair of Hawaiian newcomers in Kona Oliveira and Nainoa Dung. Both have a 1-0 record with a first-round stoppage in an outside promotion under their belt. Oliveira was unanimously picked.