The main event mystery surrounding UFC 233 in Anaheim has taken some twists and turns. Now that one title fight has left the card, which match-up will headline the promotion’s January pay-per-view?

UFC 233 features the promotional debut of undefeated welterweight Ben Askren, former title-holders Robbie Lawler and Dominick Cruz, and more. Once again, the UFC is supplying the fans in attendance at the Honda Center a top-notch slate of fights. Yet, despite being less than two months away from the show, the card lacks a main event.

A “superfight” between flyweight champion Henry Cejudo and bantamweight champ TJ Dillashaw was previously scheduled for UFC 233. Although the fight’s status as main event was up in the air, it easily could’ve slotted in as the headline bout. Now, that fight will be taking place in Brooklyn the week before UFC 233, where it will headline the promotion’s debut on ESPN+.

With that move, the promotion is left without a main event for their first PPV of 2019. While the rest of the schedule for the first quarter of the year begins to fill out, Dana White and Co. have little time to get creative and round out January’s pay-per-view. Given the busy end to 2018, and the fights already scheduled in 2019, what’s left for Anaheim’s main event?

As mentioned, champions Henry Cejudo and TJ Dillashaw won’t be headlining UFC 233. We can also rule out the likes of Max Holloway and Valentina Shevchenko, who fought at UFC 231. While we’re at it, don’t expect Cris Cyborg, Amanda Nunes, or the winner of Jon Jones and Alexander Gustafsson’s light heavyweight bout to fight again in January after competing at UFC 232 later this month.

Middleweight title-holder Robert Whittaker is also spoken for. The New Zealand-native is headlining UFC 234 in Australia against Kelvin Gastelum in February.

While it may not be a pay-per-view main event, Nick Diaz’s return against Jorge Masvidal is also off the table, as it’s being targeted for UFC 235 in March. It’ll be until around March for strawweight champion Rose Namajunas to return to action as well, likely facing Jessica Andrade in her next title defense.

It’s anyone’s guess when Khabib Nurmagomedov will fight again. Following the aftermath of his victory over Conor McGregor, the lightweight champ is facing a punishment from the Nevada State Athletic Comission. Whenever he returns, it sounds like he’ll be matched-up with former 155-pound interim title-holder Tony Ferguson. Although, Max Holloway seems to be in the mix as well. Regardless, it’s unlikely for that mess to be sorted out in time for some form of the lightweight title being on the line at UFC 233.

The same goes for the welterweight title. Dana White made his feelings clear about 170-pound champion Tyron Woodley’s timeline for his next bout, signalling that the promotion is ready to move on for the time being. That likely rules Woodley out for UFC 233, but what about an interim title?

If the promotion decides to go headline UFC 233 with the interim welterweight championship, they’ll have to get creative. Former 170-pound interim title-holder Colby Covington is holding out for a shot at current champ Tyron Woodley. And Woodley is recovering from hand surgery.

After his performance earlier this month, Kamaru Usman is deserving of a title shot. But with Woodley hurt, and Covington playing the waiting game, who could he fight? Although he currently already has an opponent at UFC 233, the answer could be Ben Askren.

Giving the former Bellator and ONE Championship champion a shot at UFC gold in his promotional debut would be a bit of a surprise. The promotion has done crazier things when forcing an interim belt into the main event of a pay-per-view however. It would also at least momentarily leave Robbie Lawler without an opponent. Depriving us of what looks like a fun bout. But that’s something the promotion could work around should they feel the need to make Askren-Usman the UFC 233 main event.

We were almost treated to the return of Nate Diaz at UFC 230 against Dustin Poirier. Poirier was pulled due to an injury, but if he’s healthy enough and the promotion is desparate, they could do worse than Diaz-Poirier headlining Anaheim’s PPV. Dana White has discussed a duo of bouts, Poirier-McGregor and Nurmagomedov-Ferguson, as matchups he’d like to make happen. Tossing Diaz, and Holloway, into the mix definitely complicates things.

Forcing Conor McGregor back in January seems like a big ask. It’s not like predicting what will happen with Diaz (either of them) is easy to do, either. Toss in Poirier’s recent injury, and UFC 233 seems too soon to make any of these massive 155-pound fights work.

What about a 165-pound title-fight? It continues to make all the sense in the world for the promotion to create a 165-pound division. And Dana White continues to publicly rail against it. Making these short-notice fights is a lot easier with 10 pounds less to cut for several major names. Alas, the odds of things changing in less than two months don’t look good.

There’s also Georges St. Pierre. Yeah, yeah, GSP coming back on short-notice to fight Covington, Usman, or Askren for the interim welterweight title is a long shot. But, St. Pierre has been talking about his return. The former two-division champ has brought up potential opponents like McGregor and Nurmagomedov.

His typically rocky relationship with Dana White looks to be in a rut, again. We also know how long GSP fights take to get made, and UFC 233 is right around the corner. Given the circumstances, don’t expect St. Pierre to save the day in Anaheim.

It’s looking like some form of the welterweight title could be featured in the main event of UFC 233. It’s anyone’s guess which combination of contenders the promotion could look to. Let us know who you think will be headlining UFC 233, and who you want to see in the main event in Anaheim! Comment below, on Facebook, Instagram or reply on Twitter! 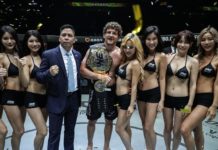