The UFC will start its new era on ESPN with Donald ‘Cowboy’ Cerrone featuring on the card, opposite Alex Hernandez at UFC Brooklyn.

It’s not Conor McGregor, but Cowboy Cerrone has found himself a fight. As first reported by MMA Junkie, Cerrone is expected to face top prospect Alex Hernandez at UFC Brooklyn next month. Otherwise known as UFC Fight Night 143, the card is the UFC’s first go-round with ESPN, set to air on ESPN+.

Cerrone (34-11, 1NC) last fought at UFC Denver, which marked the promotion’s 25th Anniversary. There, he submitted Mike Perry in the co-main event of the evening. The victory improved Cerrone’s recent run to 2-1, with wins over Perry and Yancy Medeiros sandwiching a loss to Leon Edwards.

Always looking to stay active, Cerrone had teased both a big name opponent, and a drop back down to lightweight, following his win at UFC Denver. In the days to come, he hinted that Conor McGregor might be the name — instead, he faces the lesser-known but dangerous Hernandez.

Hernandez (10-1) is a relative newcomer to the UFC, joining the promotion earlier this year. However, he made a big statement right out of the gate by knocking out Deneil Dariush, and followed that up with a unanimous decision win over Olivier Aubin-Mercier at UFC Calgary. Cerrone, who holds the promotion’s record for most wins (21), would be another step up for the former Hero FC lightweight champion.

Cerrone last fought at lightweight in 2015, against Rafael dos Anjos. Expect plenty of attention to be paid to Cowboy’s weight cut as he returns to the weight class at 35 years old.

UFC Brooklyn (UFC Fight Night 143) takes place January 19 at the Barclay’s Center in Brooklyn, NY. A flyweight title fight between T.J. Dillashaw and Henry Cejudo was recently moved to the card (from UFC 233) to serve as the main event. 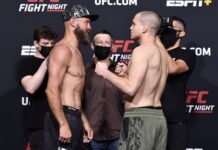