ONE Championship’s welterweight title is up for grabs this weekend, and Pacific North West fighter Tyler McGuire has a chance to claim the belt once held by the dominant ‘Funky’ Ben Askren.

The ONE Championship welterweight title has sat vacant since Ben Askren retired from competition a year ago. Not for much longer, however. On Saturday, in Jakarta, Indonesia at ONE Championship: Warrior’s Dream, a new welterweight king will be crowned. With Askren having come out of retirement in a trade to the UFC for Demetrious Johnson, it’s American Tyler McGuire taking on Sweden’s Zebaztian Kadestam for the belt.

McGuire is making quite the journey (pretty much a full day of travel) to challenge for the title in ONE. The fight is his second with the Asian MMA powerhouse; in his debut, he was paired up with the dangerous Luis ‘Sapo’ Santos. That bout, in July at Pursuit of Power, ended in a unanimous decision in favor of the American.

That earned him this title fight. But as to how a Sik-jitsu fighter from Spokane, Washington wound up fighting for ONE Championship — well that has a bit of a story to it.

Speaking to Cageside Press earlier this week, McGuire revealed that “for a while I was flirting with the UFC.” Like a rough go on the dating scene, however, potential fights continued to fall through. “There was like three different occasions where I was almost signed short notice,” he recalled. “One time I didn’t have a Brazilian VISA, another time I didn’t answer my phone in time. We were just going back and forth. They knew who I was. I tried out for the Ultimate Fighter, they really liked me.” But that fell through as well, due to the number of welterweights available.

“Then they told me I’d be on the Contender Series, then they changed their mind on that because they wanted to give it to more of the prospects,” McGuire continued. It was becoming clear the the situation could drag on. And on. “They wanted me to take a local fight, stay busy, so they could call me if they needed me. At that point, I was like 9-0, 10-0, and I had a contract on the table with ONE.” That came about thanks to Matt Hume. Well known as the coach of Demetrious ‘Mighty Mouse’ Johnson, Hume is based out of the Seattle area. He’s also an executive with ONE. “So me in Spokane and fighting in the local scene, he knew who I was,” McGuide explained. “He couldn’t believe the UFC hadn’t signed me yet.”

So a ONE Championship contract was on the table. McGuire was familiar with the promotion from “training with the Lee family out in Hawaii, Christian and Angela.” Angela, of course, holds the women’s atomweight title in ONE, and is one of the organization’s biggest stars.

“I kind of dug into more of what ONE is all about,” McGuire said, and told us that he came to realize “it’s the UFC of Asia. I liked the fact that I could just perform as an athlete, not have to really change what my values are to progress and get big fights.”

“The pay is the same and everything, so I decided well, let’s do it.” Shortly after, he became a ONE Championship athlete. In terms of pay, McGuire said he couldn’t speak for other fighters, but in with the initial contract, ONE was equivalent to the offer he got from the UFC. As he makes the trek to Indonesia, the promotion will pay for travel for him and two of his corners. Non-title fights, it’s the fighter and one corner.

One thing is certain, “ONE’s spending the cash to compete.” Though, McGuire admitted he didn’t see the recent big moves coming. Those include the signing of Demetrious Johnson and Eddie Alvarez, plus Miesha Tate coming on board as a V.P.

What McGuire did know was that “there was a lot of talent over there, I knew Askren was the big fish at welterweight but he was retiring.” Which created an opportunity for himself. “Honestly what I was more focused on was, they gave me ‘Sapo’ my first fight,” McGuire admitted. At the time, McGuire was 10-0. Luis Santos had shared the cage with Ben Askren, only for the fight to end in a no contest. “I realized, if I win this, I’m probably going to be in line for a title shot,” McGuire said of his thought process. After all, Askren was retired. “That was my big focus,” he said. “I think they were holding my feet to the fire early, just to see how ready I was, luckily I was able to answer the challenge.”

The only hesitation McGuire had with joining ONE Championship was that, as a clean athlete, ONE lacks the sort of comprehensive testing program that the UFC employs via USADA. He admits that “you worry,” but went on to say that “at the same time, ONE does a really good job taking care of their fighters. And even if somebody is on something over there, the fact that we’re not cutting twenty, thirty pounds to make weight— if they’re better at cutting, they might have a ten pound advantage on me, where as the guy who shows up for weigh-ins [in ONE], that’s that guy I’m going to see in the cage.”

As a result, McGuire is no longer miserable on fight week. Instead, he’s loving it.

“I know his striking is obviously devastating. At the same time, my striking is underrated, or underappreciated.”

Plus, there’s the shot at the title being available. While McGuire told us nobody had made any promises, he was aware that Santos, Zebaztian Kadestam, and Agilan Thani were “the cream of the crop. I was honestly expecting, before I got notified of the [Santos] fight, maybe they’d give me a mid-tier guy just to get used to the fight week, everything going on, get my feet wet a little bit.” After all, ONE had a different rule set, and a different cage. “But no, they held me straight to the fire, luckily I was prepared and ready to rock.” Getting that fight McGuire figured that “if I was getting ‘Sapo’ and I won, there was going to be something down the line. Or hoping anyway.”

Which brings us to Warrior’s Dream in Jakarta this Saturday. McGuire faces Kadestam for the vacant title, not held by any man but Askren since 2014. Of his opponent, McGuire said that “people are kind of bagging on him for his ground defense and all that, his ground game. But against ‘Sapo’ he took the fight on two week’s notice, and obviously was still explosive in the third round. Yeah, his ground game was lacking against Askren, but Askren does that to everybody, it doesn’t matter how good your ground game is. I think he showed a lot of improvement in the Agilan Thani fight. His cage wrestling, everything’s looking sharp.”

McGuire is certainly not expecting an easy fight, no matter how much success Askren was able to have against Kadestam before him. “I think he’ll be ready. I’m going to have to really work for what I want. And I know his striking is obviously devastating,” he admitted. “At the same time, my striking is underrated, or underappreciated. People take me as a grappler, which I understand, a lot of my finishes are on the ground. But when you fight on the regional scene in a cage the size of a small office, that’s what’s going to happen.”

McGuire made it clear that “I’m not afraid to stand and strike. I want to be a complete mixed martial artist. If the takedown happens, it happens. If it doesn’t, then do it on the feet, it doesn’t really matter to me.”

He’s not game planning or watching tape too much himself, as “me and Donald Cerrone kind of share the same thing with that. I have a coach for a reason. I just show up to practice and do what he tells me to do.” He’ll trust in his team at Sik-jitsu, while knowing that Kadestam is “one of the toughest sons of a gun I’m ever going to fight. He’s not going to go away.”

Thus if there is a finish, McGuire said he sees it coming late, in the fourth or fifth round. “I’m ready for a five round war. And I understand that it could be a decision, but it’s going to be a hard-fought decision,” he said. “With a finish, I can’t ever guarantee anything, but if it happens, it’s going to come in the later rounds. I don’t foresee him going away early.”

As evidence, McGuire noted that Kadestam took somewhere in the realm of 160 unanswered punches from Askren before the ref stepped in.

There’s no grudge match here, either. McGuire got to spend some time with Kadestam during medicals for their last fight. “He’s a great guy, I like him a lot. We had a pretty good idea that if we both won, we were going to be fighting each other. We hung out afterwards.”

They may not hang out after this one — but Saturday in Jakarta, the Warrior’s Dream main event promises to be one hell of a fight.

ONE Championship: Warrior’s Dream takes place Saturday, November 17 at Stadium Istora in Jakarta, Indonesia. The full card can be watched free with the ONE Championship app. 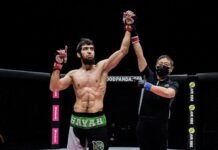 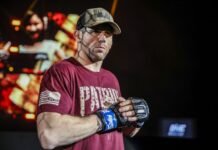 ONE on TNT 1: Tyler McGuire Keen on American MMA Fans Being Exposed to ONE’s Ruleset