Following his card opening win over Joby Sanchez at UFC Denver, Mark De La Rosa discusses taking the fight with only four days to prepare, and where his future in the UFC lies.

Denver, CO — Mark De La Rosa opened the card at UFC Denver, taking on Joby Sanchez, a late notice opponent. How late? That’s not the setup to a bad joke. The answer to “how late was he?” is, less than a week. Four days, really. De La Rosa discovered last weekend that he didn’t have an opponent for Saturday’s historic card. He discussed that, and the victory, with reporters including Cageside Press backstage at the Pepsi Center after the fight.

In regards to the win, de la Rosa was beaming. “Joby Sanchez is a veteran. He’s been in and out. Got kicked out, busted his butt, two fights on the Contender Series to get back in the UFC,” de la Rosa said. “He’s a tough guy, he’s got a lot more experience than I do. I’m just happy in there, getting the ring experience, improving as a mixed martial artist.”

He got three rounds of experience on Saturday, winning a split decision. “I knew he was going to be tough. When people take him down, he gets up so quick, so fast. I knew he was going to be kind of hard to take down, but I just wanted to gas him,” de la Rosa said of his strategy at UFC Denver. It paid off. “I  could tell he was getting a little tired in my presence, just being super cocky and confidence in there. He was getting tired, backing up, I could see him breathing hard, it just boosted my confidence.”

Between rounds, there was a little exchange between ‘Bumblebee’ and his opponent’s cornerman. “I apologize, I wasn’t trying to be rude of disrespectful at all,” de la Rosa said.

“He was saying like ‘Mark likes it’ and I was like ‘Yeah I do like it.’ I was really into the fight, I was enjoying it.” De La Rosa admitted he loves that sort of fight, and said as much during the exchange. “I’m a humble person, I promise,” he added. “I was in the moment.”

Saturday night’s bout was a bantamweight scrap, but de la Rosa is on the 125lb roster. When it comes to flyweight, “to be honest, I don’t really know anything. I took the fight at 35, 25 was never talked about,” he said. “My first fight coming in, I took against Tim on ten days notice at 35. The majority of my fights are at 35. So, if they keep the 25 division, I’m more than happy to stay in it. 25, 35, if they want to keep mixing up both, I’ll do whatever the UFC wants me to.”

As far as preparing for Sanchez short notice, de la Rosa hinted it wasn’t fun. Jordan Espinosa  fell off the card, and the scramble to replace him was on.

“Jordan pulled out on like Friday, I got a bunch of screenshots,” he said. Forwarding those to Mike Maynard, he was promised a fight. Still, “Saturday, Sunday, I had no fight.”

“Joby signed the contract Monday, Joby flew out Tuesday. So we only had four days to prepare for Joby. I signed my contract on Wednesday.”

In the end, it all worked out. 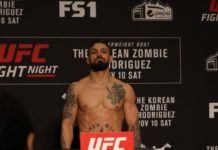 Mike Perry’s Arm Not Broken After UFC Denver, But It’s Not Great Either 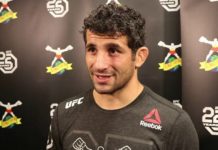