Denver, CO — Welcome to the UFC, Devonte Smith. Smith made his promotional debut at UFC Denver on Saturday night, and made it in a big way. A knockout finish of Julian Erosa, in under a minute. It was certainly a statement, especially in Colorado, where Smith trains with Factory X, which has quickly risen to prominence in the MMA landscape.

Reflecting on the win, Smith told reporters including Cageside Press after the fight Saturday that “I feel amazing. I’m just learning that was a forty-six second win. So let’s manifest the best — so that 50K extra.”

The bonus would certainly be nice for a debuting fighter. As for his immediate future, Smith plans to “go home, chill, back on to training.”

It’s a win that came close to never happening. Saying that everybody was running from him ahead of the UFC Denver card, Smith revealed that “two weeks ago, we were like, if we didn’t get a fight, then we were going to scratch it and go somewhere else.”

However, they did get a fight, against Julian Erosa. Forty-six seconds after the bell sounded, Smith also had the win. Asked if that was something he ever envisioned, Smith said that “my mindset is always on the win. Whether it’s KO, TKO, unanimous decision— I don’t want to say split decision, because that means somebody was getting at me, and I don’t like that. So unanimous decision, KO, or TKO. As long as I get the win, I’m happy.”

“That’s all that matters at the end of the day,” he continued. A win, any kind of win, inches him closer to his goals. “I will be known as the greatest of all time,” Smith said, “and I will be the next UFC lightweight champion.”

After the fight, Smith called out former TUF winner Ross Pearson. Asked why Pearson in particular, Devonte explained that they’d come close to having a bout previously. “It was a possibility I might have gotten that fight anyway,’ he revealed. “But since I didn’t, I thought this would be a great opportunity to call him out, you know for my debut, forty-six seconds, the UFC sees that I’m serious. And we can go from there.”

As to what he sees in Pearson, Smith said “A veteran. Somebody, another body, another opponent. Somebody else in my way to get where I want to get.” 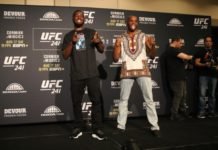 UFC 241 Results: Khama Worthy Proves He is Worthy of Roster Spot with KO 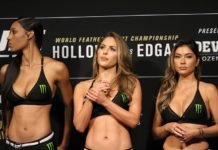 Welcome to the UFC: Khama Worthy