Mike Perry knows he’s is in for a war at UFC Denver, and he’s already hearing it from supporters of local hero Cowboy Cerrone. His first battle, however, will be making weight.

Denver, CO — Mike Perry (12-3) is a controversial figure in the UFC. From questionable choices in costumes to controversial comments, Perry is certainly a target for criticism. He’s also loved by fight fans for putting on wars in the cage. He’s as intense as they come, and not one to let a little heckling bother him.

Cerrone’s status as a local sports icon means Perry will be hearing from fans throughout Saturday’s fight. In fact, he didn’t even make it to Saturday, getting booed at the open workouts. “That goes with the show, man. That guy was doing good for the fans by heckling me like that,” Perry told the media, including Cageside Press, afterwards. “He got my energy going. They didn’t boo me too bad. I wonder how it’ll be like on Saturday.”

Despite being in hostile territory, Perry hasn’t actually had it too bad so far in Denver. The host hotel during fight week is a good distance from the venue. That will all change on Saturday night, of course.

Perry, for one, believes it should be he and Cowboy topping the card. Still, he gets why the billing wasn’t changed after Frankie Edgar was forced out of his fight with The Korean Zombie. “It is what it is. They promised the Korean Zombie. They’ve got to stick behind their promises. They promised the main event. He’s coming back. He’s got a big entourage with him. He’s going to put on a show,” said Perry. Still, Perry had to get in a little dig. “We’ll see how many viewers they lose after me and Cowboy’s fight.”

There’s a big battle for Perry before he even hits the octagon on Saturday, and that’s weight. “I woke up at about 180 this morning, so I lost about 14lbs in a few days,” Perry said. “Just drinking water and manifesting, imagining being 170lbs, just thinking about it I’m getting it done. Eating less, working harder, working more. I’m ready to fight, man. It’s hard.”

‘Platinum’ Mike Perry then explained the mental side of the weight cut. “It’s hard to think that you can beat somebody up when you’re on this weight cut. You’re feeling so weak inside, and you’re like ‘dang in a couple days I’ve got to fight somebody the way that I feel right now.’ But once you get out there and you get pumped up a little bit, you realize how strong you are.”

“Somebody’s in trouble on Saturday,” he added. “I’m really looking to hurt somebody.”

A 25lb or so cut down to welterweight is “kinda” the norm for Perry. “I just usually do it over more time, and I diet further out,” he admitted. “But I didn’t diet, I was enjoying life too much, fast food too much in the last week. I couldn’t really stop myself until my mind choose to do so.”

Rest assured, however, that he’ll make the weight. Perry is certain of that. He visualizes it. Tomorrow, he’ll be another four pounds closer. “My mind has been getting stronger,” he insisted, and that’s the key.

“I came in with a strong mind, but there’s been ups and downs. This sport will do that to you, this career with take you left and right, up and down,” Perry elaborated. “When you think you’re great, it’ll show you how weak you are. When you think you’re weak, you’ll show yourself how great you are. It’s about staying near that greatness, and always justifying the negative things that try to get thrown at you, and just turning it around into a positive thing.” 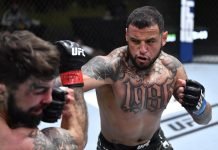 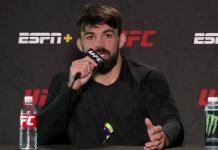