Germaine de Randamie is not worried about what ifs or could have beens, and is ready to move past Cris Cyborg at UFC Denver this weekend, as ‘The Iron Lady’ returns against Raquel Pennington.

Denver, CO — It’s almost mind-boggling to think that ‘The Iron Lady’ has been out of action for over a year. Well over, in fact. That will change this weekend at UFC Denver. Still, UFC fans have not seen Germaine de Randamie (7-3) since her UFC 208 fight against Holly Holm, where de Randamie won the inaugural UFC women’s featherweight title. The fight was mired in controversy due to multiple blows after the bell landed by de Randamie. And in the months following the bout, the Dutch kickboxer refused to defend her title against Cris Cyborg.

That resulted in de Randmie being stripped of the title. However, she told reporters including Cageside Press at UFC Denver’s media day Thursday that she doesn’t worry about the ‘what ifs?’ of the past.

On her pending fight with Raquel Pennington at 135lbs, de Randamie said simply that “I want to finish this fight. I want to finish it in Iron Lady-fashion way. I’m going to do everything I can.” She added that in Pennington, a former bantamweight title challenger, “I know I have a tough competitor, I know she’s not going to let me do that that easy. But we’re gonna do our best, and we’ll see what happens.”

Germaine de Randamie also discussed the topic of her inactivity. “Of course I want to stay active, that’s the best scenario,” she said. But the former champion worries about looking ahead, or saying “anything that I cannot live up to. Like I said I have a great fight, and a tough fight in Raquel. We’ll see what the outcome of that fight will be, and how I feel afterward.”

“Ask me the question after the fight again,” she suggested.

On the subject of rejecting the fight with Cris Cyborg, and losing her UFC title, de Randamie suggested she has no regrets. “Sometimes in life you make decisions. You know when you make a decision, it has consequences,” she explained. “Every decision in life has consequences, no matter what. I knew there were going to be consequences on the fact what I’ve said.”

Still, she pointed out that the plan was always for her to return to bantamweight after the Holly Holm fight. “If you look back at my history leading up to the 145 title fight, I’ve always said ‘I go back to 135.’ Never I’ve said, ‘I’m not going back to 135.'”

Admitting that “it has been a hard road,” the ‘Iron Lady’ added “but you know, that’s life. Life is bumpy. I’m here right now, I’m fighting Raquel Pennington, and I hope after Saturday night, we can leave all that behind.”

As to Amanda Nunes facing Cyborg later this year, de Randamie told reporters that “I think they’re going to have a great, great fight. I’m really looking forward as a fan to that fight. It’s going to be a tough fight from both sides.” 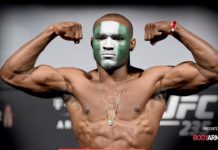