Elias Theodorou has an upcoming bout with Eryk Anders in just over a month, but that hasn’t stopped his efforts outside the cage, including a calendar project, and fighting for a TUE for cannabis to manage chronic pain.

Moncton, NB — This past weekend, UFC middleweight Elias Theodorou stopped by back stage at UFC Moncton. While not on the card, Theodorou has become a fixture at UFC events outside the cage, whether it be in the stands, or taking over the UFC’s official twitter account. On Saturday night in Moncton, the middleweight spoke about his extracurricular activities, and his push for Therapeutic Usage Exemptions for cannabis under USADA.

Not to mention his upcoming fight with Eryk Anders at UFC 231. On that front, the Canadian addressed Anders’ last performance, saying “it was a great fight. Obviously he took it on six days notice. I think with Eryk, in many ways he did the same thing I did with Thiago Santos, but I did those about two and a half years ago, so I’ve been able to learn from it.”

The hellacious fight between Anders and Santos topped the UFC Sao Paulo card in September of this year. Anders was rendered unable to continue in the bout, barely able to stand by the end of the second round.

“He’s athletic, explosive, he’s very good in regards to reflexes,” Theodorou said of his upcoming opponent. “We all saw that soccer kick where he was somewhat down, potentially, on the scorecards and threw that Hail Mary pass and knocked Tim Williams’ head off into the bleachers.”

“He’s a great fighter, but he’s a very new fighter. I’m going to take him out to deep waters and kind of break him,” Theodorou predicted. UFC fans will know soon enough, as the pair meet in a little over a month’s time in Toronto.

The date will keep Elias Theodorou close to home, and asked whether he likes to fight in his own backyard, or to avoid those distractions, he told Cageside Press that he enjoyed that “best of both worlds.”

“I love traveling, I love training. The fighter’s journey is what drew me to mixed martial arts,” he said. “I was a fan first, and then just jumped into a gym, and never left. The last fight before this was in UFC Liverpool, the one before that, UFC Sydney. I really love training and traveling.”

“The missus and I, and even my parents. Who are retired and in some ways my groupies, because they follow me everywhere I go,” he added. “It’s great to spend those times afterwards, because after it’s all said and done, it’s those memories, and those experiences that, inside the cage and out, that I get to take with me forever.”

As for other pursuits outside the cage, Theodoreu, who has served as a ring boy for Invicta, and has his own Mane Event podcast (jokingly claiming he had a trademark on both), said his next venture will be able to hang on your wall.

“We’ll be setting up a calendar in the near future,” he revealed. “So this could kind of be an open call to other UFC fighters, because I’m not going to have a whole calendar just about yours truly — even I know that would be narcissistic. Point being, open call, eleven other months, whether it’s flyweight to heavyweight.”

“Big is beautiful in mixed martial arts, and this is an open call for all UFC fighters who want to be part of the Ring Boys calendar,” he finished.”

What Theodoreau has been working on most, however, outside training, has been getting cannabis accepted under USADA — and specifically, obtaining a therapeutic usage exemption for himself thanks to nerve damage.

“This has been a process of seventeen months. I’ve been working hand-in-hand with USADA,” he explained. “They’ve been very helpful throughout the process, but I think in some ways, it’s an outdated process. Especially considering the fact that I am a Canadian [where Marijuana is legal], and my doctor diagnosed and prescribed my medical condition, which is bilateral neuropathic pain. Which essentially is nerve damage.”

What that actually amounts to is that “every time I train to hit, [it’s the] same reaction as hitting your funny bone.” Not pleasant, in short. “I get constant stingers, there’s burning sensations. There’s a lot of day in, day out stuff that really effects me as a patient.”

“A lot of this isn’t about training in general. It’s also about my way of life, and my quality of life after the fact,” he pointed out. “Us athletes have to carry that for the rest of the twenty-four hours in a day. Cannabis has been shown, personally, to be a better alternative, not just in regards to its results, but also the results of the side effects of the drugs that I’ve had to take.” Not to mention life after fighting.

Theodorou has a prescription from his doctor, and a medical cannabis provider. Yet those outdated aspects of USADA? The organization pushed him toward first line drugs. “They’ve already agreed that I have bilateral neuropathic pain, and I’ve shown that, but they want me to exhaust all other options. And that includes opioids, antidepressants, and other SSRIs.”

Opioids, of course, are highly addictive and the center of an ongoing addiction crisis in North America. SSRIs (selective serotonin reuptake inhibitors) carry with them a host of side effects, from lethargy and nausea to increased thoughts of suicide.

“They literally make you do the opposite of what modern medicine does,” Theodorou said of the USADA process, “in the sense of, you have to do everything else that is first line, and then come back to what you already know is prescribed by your doctor and medical practitioner.” In other words, why meddle with dangerous and addictive drugs when you already have a safer alternative.

“Obviously safety is first,” he continued. “I’m a huge believer in a clean sport, and USADA, and very thankful for the UFC for teaming up with them. Because again, I really appreciate what they do, and as I mentioned earlier, they’ve been helpful all the way through. I just think there’s a reason why the CCES, the Canadian Centre for Ethics in Sports, the Canadian subsidiary to USADA, lobbied against [banning cannabis].”

Unfortunately, other arms of the organization led the charge against the drug, in particular the U.S. and Japan. “They pushed against it because of the way they structure it. For instance, the U.S., they deem it as a Schedule 1 drug, which means it’s labelled as the same as heroin. Regardless of what you think about cannabis, I think we can all agree it’s not as bad as heroin.” Because of how the drug is labelled, the government sees it as having “no medical properties to it in any way, shape or form. So that’s why there’s a need to exhaust all the other first line medicines.”

“This is the backwards way of modern medicine. You don’t find what works for you and then go through all the other harsher aspects,” Theodorou exclaimed.

Other drugs left Theodorou bloated and gaining weight. Not good for a fighter who needs to be on weight. And that’s besides the addiction concern of opioids, and other side effects.

Asked whether it’s a bit crazy that twenty years after Canadian snowboarder Ross Rebagliati tested positive for Marijuana metabolites at the Nagano Olympics (Rebagliati was able to keep his gold medal), Theodorou answered “yes and no. It’s been a long process. I’ve actually been in contact with him, and kind of let him know about what I’m in the process of doing. He’s been very supportive as well.”

“This is something that Canada, in many ways, has been at the forefront of in sport. Obviously now with the nationwide legalization of cannabis,” he added.

Whether USADA comes through in the end, or perhaps even changes its ways, remains to be seen. But twenty years after Nagano, and with marijuana now legalized in Canada and parts of the U.S., it’s high time the approach to the drug in sport was reconsidered. 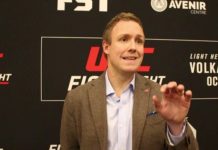 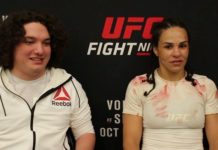 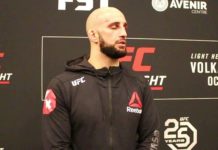