It may seem crazy to think that a UFC veteran with over ten years service needs to take a day job to make ends meet, but that’s where Ed ‘Short Fuse’ Herman found himself over the Summer.

Moncton, NB — Ed Herman isn’t done with fighting just yet. It’s something we spoke to him about a little over a week ago, and something he again reiterated during fight week ahead of UFC Moncton. He’s not done, especially just when the paychecks are finally getting good. And not after getting a reminder of what having a day job is like.

When it comes to how much longer Herman will keep at it, the ten-plus year veteran of the UFC answered that “as long as I can compete at a high level, which I think I can keep doing for at least a couple more years. I’ve got some fight left in me.”

“I’ve had some injuries through my career that’s kind of slowed [it] down,” he noted. “I haven’t been able to compete as much as I wanted to consistently.”

Age seems to be the deciding factoring, barring any serious injury. “I’m almost forty, I just turned thirty-eight, so two more years maybe. We’ll see what happens. I’m kind of taking it one fight at a time right now,” Herman said. “Seeing where my body takes me really.”

What gets him out of bed and into training mode each morning? “My wife will kick me in the butt if I don’t get out of bed,” he joked. But more seriously, Herman said that “just still having the hunger to get in there and compete. And you know, coming up short your last fight, always drives you to get back in there.”

“I feel like I’m always improving, I’m always a student of the game,” he added. “I’m learning all the time. I’m continually just trying to get better.” He sees himself as a lifetime martial artist. “I’m not going to stop until I have to.”

Having moved up from middleweight not too long ago, Herman reiterated on Thursday that light heavyweight is his home moving forward. “Unless they do 215, maybe I’ll go up to that. I’m definitely not going back down to 185.”

When we last spoke to ‘Short Fuse’ he’d mentioned times where he’d questioned if his career would continue. As to how close he came to packing it in, “I didn’t know with my knee injury that I had last time. I’ve had three ACL injuries, a lot of guys have a hard time coming back from one.” Though, he allowed, “these days you see it more with the other sports and stuff.”

Still, “I thought about hanging them up,” Herman said. “I actually had to get a job working construction over the summer just to pay my damn bills. After doing that for a couple months, I really wanted to get back in here.”

The working world isn’t something Herman was as prepared for as he thought. “First I thought ‘getting a regular job ain’t so bad,’ but yeah, it sucked,” he admitted. The job saw him “driving heavy equipment and stuff, which wasn’t too bad, but still, being out in the elements, having to work under a d*ckhead boss, yeah, not cool man, for me at this moment.”

That doesn’t mean he isn’t open to another kind of side gig. “I’m kind of working on getting in the fire department, I’ve got a bunch of buddies who are firefighters. I can do that and still fight possibly too. So we’ll see what happens.”

Ed Herman faces Gian Villante at UFC Moncton on October 27. The card goes down at the Avenir Centre in Moncton, NB, and airs on Fox Sports 1 (TSN 5 in Canada). 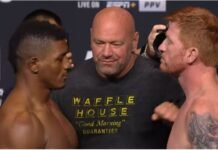 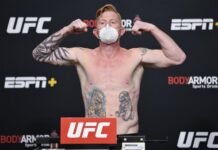