Erick Silva is out of Bellator 207 and his Welterweight Grand Prix bout with Lorenz Larkin, while the hunt for a replacement is on.

Silva (20-9, 1NC) is reportedly suffering from a fissure in the rib cartilage. He detailed the injury to MMA Fighting, saying that “I ended up injuring my rib during a sparring session at Team Nogueira.” He went on to say that “I felt a lot of pain right away, I thought it was fractured. I went straight to a hospital to get a series of exams done and they noticed it wasn’t fractured, only injured.”

That’s the good news, and Silva hopes to make his promotional debut later this year. The Brazilian got back in the win column at LFA 45 in July, where he defeated Nick Barnes. That snapped a two fight losing streak at the end of his UFC tenure.

Fellow former UFC combatant Lorenz Larkin, meanwhile, is in need of a new opponent. Bellator has indicated the fighter will stay on the card as they seek a replacement. 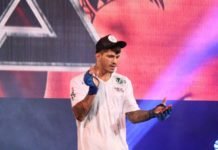