Renan Barao is struggling with his weight once more, missing the bantamweight limit badly at the UFC Sao Paulo (UFC Fight Night 137) weigh-ins on Friday.

It was a bad day at the scales for former UFC bantamweight champion Renan Barao. Barao (34–6 (1)), once one of the most feared 135lb fighters on the planet, hit the scales for the UFC Sao Paulo weigh-ins only to come in at 141.6lbs. That’s well over the non-title fight limit of 136lbs. Barao is facing promotional newcomer Andre Ewell at the event.

Ewell (13-4) will receive 30 percent of Barao’s purse, per a report by MMA Fighting. ‘Mr. Highlight’ now has a grand opportunity to make a big splash in his UFC debut, though whether the weight discrepancy comes into play remains to be seen. Ewell is currently on a four fight win streak.

‘The Baron,’ meanwhile, continues on a downward spiral that began with the loss of his title to T.J. Dillashaw in 2014. Barao is just 2-4 since then, and has lost two straight. Friday was not his first time struggling with weight, though neither a trip up to featherweight nor a catchweight 140lb fight with Aljamain Sterling resulted in success. 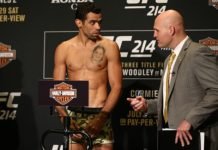