Melvin Manhoef and Chidi Njokuani will meet in a middleweight main event at the upcoming Bellator 210 in Thackerville, Oklahoma.

Recently re-signed Bellator middleweight Melvin Manhoef (30-14-1, 2 NC) has his return date set. In a press release distributed Wednesday, Bellator MMA announced that Manhoef would face Chidi Njokuani (18-5, 1 NC) in the Bellator 210 main event this November. With both fighters being crafty strikers, the fight promises the potential for a crushing knockout.

The event will be carried on the Paramount Network, and will stream live on DAZN, Bellator’s new streaming partner, as well.

Manhoef, 42, is a long time MMA veteran, starting as a pro way back in 1995. Reuniting with old Strikeforce boss Scott Coker in Bellator, Manhoef challenged then-champ Rafael Carvalho for the middleweight title at Bellator 155 in 2016. Losing a controversial split decision, he wound up being granted a rematch at Bellator 176 last year, but was finished by a Carvalho head kick (Carvalho would successfully defend the title once more, against Alessio Sakara, before losing the belt to Gegard Mousasi at Bellator 200 this past May).

Chidi Njokuani, more than a decade Manhoef’s junior, made his middleweight debut at Bellator 189 last December, where he earned a unanimous decision over Hisaki Kato. The move up in weight came after a string of blown weight cuts and catchweight fights. Overall, Njokuani is 5-1 under the Bellator banner. 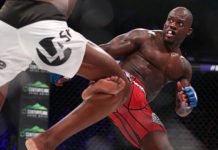