At Bellator 205, Roger Huerta will meet a surging Patricky Pitbull on short notice, an opportunity he simply could not turn down, given the title picture implications.

Lest we forget, the definition of insanity is repeating the same action, over and over, expecting different results. Yet here we are again, witnessing Roger Huerta take another short notice fight in Bellator. He did just that in his return to the promotion earlier this year at Bellator 196. That night, he was on the wrong end of a submission, with former UFC lightweight champion Benson Henderson claiming victory. Later this week, at Bellator 205 in Boise, ID, Huerta will look for a different result, as he takes on Patricky Pitbull.

It’s a fight that, should he win, could propel him straight into the lightweight title picture in Bellator, he told Cageside Press heading into Friday’s main card battle against Pitbull. Which made it an opportunity he couldn’t turn down.

This is Huerta’s second stint in Bellator, something he told us he’s enjoying “quite well,” this time around. Citing the “good guys” at Bellator, he said “I’m fortunate, I’m fortunate to be here.” It’s an opportunity that came about because Huerta picked up the phone and made a call, rather than wait for an opportunity to come to him.

“I called [Scott Coker] to see if they would be interested in me fighting with their company, and he said yes. I got a call back by Vincent [Cho, Bellator’s matchmaker], and here we are,” Huerta explained. That turned into the short-notice fight against Benson Henderson back in April. That trip to Budapest didn’t go Huerta’s way, but it did show him what to expect in the modern day Bellator.

“I gotta train. I gotta train with other fighters, and just be better prepared,” he said of the lesson learned. “These guys are definitely up there in their skill level, and I have to work.” It’s something he’s addressed training at Tiger Muay Thai in Phuket, Thailand. “I think I’ve done that now. I’ve surrounded myself with a lot of good fighters, and we’ve been training, plugging away.”

One of the benefits of training overseas, “we have a lot of fighters from all over.”

Huerta has been used to a little international flavor in recent years. Competing for ONE Championship and elsewhere, he’s fought all over the globe. Bellator 205 in Boise, in fact, will be his first fight stateside since 2011. “I’m definitely looking forward to fighting in the states again,” he said of being back on American soil against Pitbull. “Idaho isn’t my home town, but I’m an American citizen.” Pitbull, properly known as Patricky Freire, of course, is not. That should give you some idea of who the fans will be pulling for.

“This is a no-brainer. I’ve got nothing to lose, all to gain.”

As for any weight cut issues stemming from traveling back to the U.S. for the fight, Huerta isn’t worried. “I just have to not eat too much foods with sodium, high salts, stuff like that,” he told us. “A lot of greens, a lot of bland foods.”

The fight itself is another short notice battle against a tough opponent for ‘El Matador,’ but it was too good an opportunity to turn down. Bellator reached out to him after Goiti Yamauchi was forced out of the fight due to injury. “This guy’s [Pitbull] right in the mix for title contention. I beat him, then my hand gets thrown in the mix. So this is a no-brainer. I’ve got nothing to lose, all to gain.”

He recognizes the danger (Pitbull enters the night on a three-fight win streak), but the potential reward is worth it. “He’s game. He’s definitely got knockout power in both hands,” Huerta observed. “He’s a tough, tough, tough opponent. So I gotta bring it. I gotta be alert out there. I’ve got to bring my A-game. I’m definitely focused, and I’m coming with it.”

As for any prediction, “I ain’t no fortune teller, but hopefully [it ends] with my hand raised.”

Despite debuting back in 2003 and having fought all over, Huerta isn’t done yet. Citing older fighters like Mark Hunt, retirement isn’t exactly on the horizon. “I don’t see it any time soon. I just gotta get momentum, gotta get some good fights in, and be right in the mix.”

“I have a place, I have a platform to showcase my skills. I look at myself as an artist, and that’s the gallery.” – Roger Huerta, on fighting in Bellator MMA

As for people who are quick to point out that Huerta’s best days might be behind him, Huerta wasn’t overly concerned. “I don’t know what people are thinking, to be honest with you,” he explained. “I live okay. I have an okay life. I focus on what I’m doing in my life, and what I’m doing on this planet. How I want to spend it. That’s my focus. Right now, I have a task at hand, I gotta fight Patricky Pitbull. That’s my job. So I’m going to go do that. After that, I get to close that mental state for a bit, before I have to re-open it again, before competing again.”

As for that next fight, and whether he’d be open to moving up to welterweight (where he has dabbled in the past), “I’m open for whatever the company would want. I have a place, I have a platform to showcase my skills. I look at myself as an artist, and that’s the gallery. And I get to go and do my thing, I get to test my skills with another skilled individual.”

Or, putting it another way, “I guess I’m just a pawn on the chess board.”

Don’t miss Roger Huerta testing his skills against Patricky Pitbull on Friday, September 21 in Boise, Idaho on the main card of Bellator 205. The televised portion of the event airs live on the Paramount Network starting at 9PM EST. 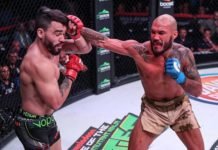 Bellator 234’s Roger Huerta: “I’m After That World Title. That’s the Last Thing I’m Going for in This Fight Game”