A little bit of good news in the case of LeRoy Johnson, who suffered a severe spinal injury at PFL 7 late last month.

An excellent card in the cage, PFL 7 late last month had a scary moment. The card, which took place in Atlantic City, New Jersey, was opened by a heavyweight bout featuring Muhammad (Mo) De’Reese and LeRoy Johnson. Johnson ate a brutal knockout blow early in the bout. Making matters worse, the knee that sent him crashing to the canvas was coupled with his head hitting the cage post.

Johnson was out for some time, and transported to hospital. There, he underwent a pair of surgeries, per his manager, Daniel Rubenstein. One of those was to correct a vertebrae issue. Now, Johnson’s fiancee, Kaitlyn Leask, has issued a statement on the fighter’s progress (via Ariel Helwani):

As most of you know, last Thursday Leroy suffered a severe spinal injury during his fight in Atlantic City. This has been the most terrifying week of our lives. Leroy went through two surgeries to stabilize the broken bones and we’ve been waiting on the swelling to go down to see what’s next.

Leroy is a fighter and the strongest man I know, this afternoon he was able to stand! We have a long road, but we know all of our friends and family are praying for us. God is good all the time! #leroystrong

While Johnson likely has a long road ahead of him in terms of recovery, the fact that he’s standing is great news, and a small glimmer of hope.

PFL 7: Clay Collard Feels He’s Finally Getting The Respect He Deserves Ahead Of Playoffs 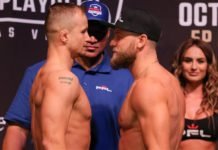 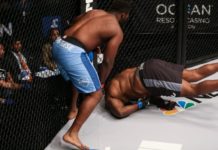