The UFC heads to Lincoln, Nebraska for the first time this weekend, and they’re bringing Justin Gaethje. While he’s deservedly the talk of the event, four other fighters have the chance to gain more than a win in their match-ups on Saturday night.

It’ll have been three weeks since the UFC held an event when the card in Lincoln kicks-off this weekend. All eyes are on the main event between Justin Gaethje and James Vick, but there’s plenty of fun left on the rest of the 13-fight card. Featuring more than a few interesting match-ups, several fights have quite a bit on the line.

Whether you’re a title-contender or an unranked fighter, every bout matters. But, fights at certain points in a fighter’s career can mean more than others, based on the circumstances. Great match-ups are always fun. With a little more on the line, those fights are even better for those of us at home.

Several fighters find themselves at a point where they have plenty to gain, and plenty to lose, at UFC Lincoln. Whether it’s pushing toward the title picture, bouncing back from some losses, or cracking the official UFC fighter rankings, these four fighters have the most on the line in Nebraska this weekend.

This one is pretty obvious. It’s clear that James Vick, in his first appearance in a UFC main event, has a prime opportunity to stake his claim as a top-10 lightweight in the promotion. The Texan is 13-1 in his career, and is currently on a four fight win-streak. After going 3-0 in 2017, and capping the year with an impressive TKO of Joe Duffy at UFC 217, Vick defeated Francisco Trinaldo via unanimous decision in February.

While his current run is impressive, Vick lacks a high-profile victory on his record. When he steps into the Octagon across from Justin Gaethje, he’ll have the chance to change that. He’s getting the chance due to Al Iaquinta being pulled from the match-up in late-June.

Gaethje is a highlight waiting to happen, whether he’s delivering or taking the punishment. His fights are must-watch, and that isn’t necessarily the case when it comes to Vick. With a win over Gaethje, in decisive fashion, Vick’s argument for climbing up the lightweight ranks and into the title picture gains a much needed bullet point. He’d likely secure another top-10 opponent, and an even bigger opportunity than the one in front of him at UFC Lincoln.

Although his UFC career has been consistently inconsistent, Andre Fili looks to have turned a corner. He’s on the first two fight win-streak in his time in the UFC, most recently defeating Dennis Bermudez via split-decision in January.

Generally the 28-year-old has struggled against top-tier opponents. With losses to the likes of Max Holloway, Yair Rodriguez, and Calvin Kattar, Fili has come up short when the opportunity to earn a statement win has come his way. At UFC Lincoln, he’ll get another chance.

Former lightweight Michael Johnson didn’t look great in his featherweight debut against Darren Elkins earlier this year. But we aren’t doubting Johnson’s credentials. Yeah, he’s on a tough stretch, losing three fights in a row (and five of his last six). He’s also been fighting the likes of Nate Diaz, Khabib Nurmagomedov, and Justin Gaethje.

Nobody would be surprised if Johnson gave Fili problems, and returned to winning form. But if Fili can earn the win, a jump into the top-15 of the UFC’s official rankings wouldn’t be out of the question. Once there, on the best run of his career, he’d likely be given another opportunity to make some noise with the top-tier 145-pounders in the promotion.

Filling in on short notice is a great way to make your bosses, in any profession, like you a little bit more. When you’re a fighter who’s lost three of their last four fights, doing whatever it takes to stick around is important. So, it makes sense for Cortney Casey to fill in on relatively short-notice against Angela Hill at UFC Lincoln.

Casey has lost back-to-back fights, losing split-decisions to top-10 ranked strawweights Felice Herrig and Michelle Waterson. Now, filling in for Alexa Grasso, Casey faces another ranked opponent and the chance to turn around her 2018 campaign.

Hill is a fairly well-known fighter to consistent followers of the UFC, and fighting on the main card of a televised event featuring Justin Gaethje doesn’t hurt either. With an impressive win over a solid opponent, and avoiding a three fight losing-streak, Casey could find herself back in the top-10 talk at 115-pounds by the end of the year.

In his second UFC fight, Cory Sandhagen is fighting at bantamweight for the first time in more than three years against a guy with more than 40 fights under his belt. He’s used to unique circumstances, after making (and winning) his UFC debut in January just eight days after fighting (and winning) at Legacy Fighting Alliance 31.

Those fights came at featherweight, as all but one, his first professional fight, have in his 7-1 career. Sandhagen has won three straight bouts, all with finishes, while showing impressive growth in a short period of time. At UFC Lincoln, he will be fighting undoubtedly the toughest opponent of his career: Iuri Alcantara.

Alcantara has racked-up 36 wins in his career, and made his UFC debut in August of 2011, when Sandhagen was 19 years old. The Brazilian hasn’t shown many signs of slowing down. He earned a 66-second TKO victory over Joe Soto in February, snapping a two fight losing-streak.

It’ll be interesting to see how Sandhagen fares against an opponent with much more experience, especially considering the drop down to 135-pounds for the prospect. Defeating Alcantara will earn Sandhagen instant credibility in the loaded bantamweight division, and start him on the fast-track to top-15 ranked opponents by the end of 2018.

We’re ready for the UFC to return this weekend, and Lincoln looks like it has a solid card to enjoy. From the main event to the Fight Pass prelims, plenty of fighters have a lot on the line on Saturday night. But, with a win, these four fighters have more to gain than the rest. Let us know who you think has the most to gain at UFC Lincoln, and which fight you’re looking forward to most! Comment below, on Facebook, or reply on Twitter! 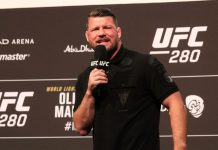