Dana White’s Tuesday Night Contender Series was back in action to close out July, with a pair of heavyweight scraps and a lightweight featured bout beetwen Roosevelt Roberts and Garrett Gross.

DWTNCS was in the midst of a strong second season heading into week fifteen. Having boasted names like Nick Newell, Greg Hardy, and Antonina Shevchenko, interest in the streaming series was up (and perhaps even more so, with the knowledge that the show would move to ESPN’s own streaming service in 2019). While there were no “big” names on DWTNCS 15, a pair of heavyweight bouts ensure the strong likelihood of a big knockout.

Not to mention, the way contracts had been dished out thus far in the second season, there was a good chance that multiple fighters would make it to the UFC.

Check back come fight time for a recap and full results from tonight’s episode!

Heavyweights Juan Adams and Shawn Teed would kick off the DWTNCS 15 card on Tuesday night at the TUF gym in Las Vegas.

Teed opened up the action with a solid punch straight up the middle, but Adams soon had him backed up, and was feeding him blow after blow. Teed would circle out of danger and fire off a counter, but was still rocked. He looked to drag teh fight to the ground, but wound up pulling Adams on top of him. Adams then backed off, and the ref had Teed move back to his feet. He then pressed for a double leg, switched to a single, but Adams was landing hammer fists even while defending the takedown. Teed wound up essentially pulling guard, and eventually latched on with a heel hook. They’d roll several times until Adams pulled free, which allowed him to eventually take the back. Teed would make it to the fence, but was eating some heavy ground n’ pound. He gave up his back, risking a rear-naked choke, then found himself mounted, which allowed Juan Adams to finish the job with ground n’ pound.

In the evening’s second bout, at featherweight, Jordan Griffin entered a -200 favorite over Maurice Mitchell. Mitchell fired a high kick early as both men came out ready to throw. A straight left by Griffin knocked out Mitchell’s mouthpiece. Griffin would shoot in for a takedown around the midway mark of the round, only to give up his neck. He was then forced to walk the cage on his back, moving his body around Mitchell in order to escape. Mitchell would then land a solid punch that halted Jordan Griffin in his tracks. That was followed by a kick to the body. Griffin would fire back, stunning Mitchell with a left hook! Mitchell was dropped, and Griffin practically launched himself into a rear-naked choke. It was in tight, and Mitchell was forced to tap!

With both men staying on their bicycle early, Sumter would land an inside leg kcik early, while Heinisch fired off a number of kicks of his own, both low and high. Sumter went to the body while Heinish attacked with a flying knee, which led to a takedown by Sumter. Heinish defended with a guillotine, but his opponent was able to pull free. Heinish would try for an arm-bar next, only to lose it and give up the back as he stood up. Sumter had one hook in, but gave up position and Heinish moved into guard. Sumter defended with a body triangle but ate a ton of elbows from the top, which wound up finishing the job!

Sipe came out swinging early, and initiated a clinch on Mayes. He looked for the takedown, but Mayes clipped him with an unintentinoal headbutt. Sipe continued to try to get the fight down, but Mayes fought him off. They setttled down just a little then, but Mayes tried for a jumping kick or knee which led to any easy takedown for Sipe. He moved to side control, but Mayes was able to power back up. There looked to be another head butt in that sequence. Sipe would deliver with a heavy leg kick. However with Mayes slowing, Sipe would connect low, giving him a chance to recover. Back underway, yet another head butt landed, possibly the third or fourth of the fight with no warnings or even mention from the ref.

In round two, both men came out swinging hard, with Sipe still by far being the fresher fighter. Mayes would try a spinning back fist by the fence. Sipe would come over the top with a right, but he was bleeding badly from a cut off a short elbow, which the doctor came in to look at. They let the action continue; Mayes fired off a spinning back fist, missed, then clipped Sipe! Mayes poured it on, landing hammerfists and muscling Sipe to the ground. From there, it was a bloody nightmare for Sipe. He ate blow after blow, trying to cover up or roll as the ref urged him to fight back. Finally, with seconds left in the round and Sipe merely covering up, the ref made the call. Wow. Mayes with the comeback win.

Roberts looked for a standing guillotine early, putting the pressure on Garrett Gross. Roosevelt then turned Garrett, putting his back on the fence before securing a takedown. After briefly looking for a choke he peppered Gross with short punches. Garrett struggled to escape, and Roberts continued to look for a guillotine. As Gross worked to get back to his feet, he was slammed back down. Roberts landed some strikes from above, but had to watch for upkicks. Gross would escape the round, but the frame was completely onesided for Roosevelt Roberts.

Within the first minute of round two, Gross was on his back again, and Roberts had moved to mount. Roberts briefly pinned an arm with his knee and dropped some heavy ground strikes. He was able to move to the back off those strikes, locking in the rear-naked choke and getting the tape for the win!

After the dust had settled, Dana White announced that Juan Adams, Ian Heinisch, and Roosevelt Roberts were getting contracts. And, in a last minute change of heart, he opted to take Jordan Griffin as well, making it four contracts awarded on the night. 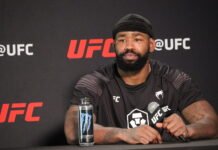 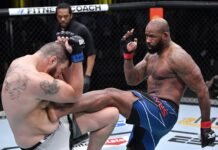