Two weeks, not even sure of who your opponent is? No problem for Ryan Lilley, who won big at LFA 45.

LFA 45 co-main event bantamweight Ryan Lilley improved his record to 9-3 on Friday. Hitting the LFA cage just prior to the return of former UFC star Erick Silva, Lilley was definitely in the spotlight. Not only given who was topping the card, but also for the fact that he was making his LFA debut. In the co-main event. On two week’s notice.

That, right there, is an impressive feat, especially given he won via a first round TKO. Not that there was any pressure on him to finish, since only the entirety of the main card at LFA 45 ended in stoppages.

Lilley addressed the bout against Jordan Winski immediately following the fight Friday, telling Cageside Press that “I took the fight on two weeks notice, LFA called, can’t turn them down.”

The possibility of such a big fight at this stage of his career, with TV time on AXS TV, was a huge plus. It meant, however, limited time to prepare. “I didn’t see too many videos on him, stuff like that,” he said of Winski.

Not that it mattered in the end.

“I wanted to go out there and feel him out a little bit, that was the game plan, and then kind of put pressure on him,” Lilley explained. “He got me with a good — I thought it was a left high kick, but it was a right high kick. Felt it, it woke me up a little bit, like ‘okay, I’m in a fight.’ So after that I listened to my coaches, when he threw that jab, I leaned hard to my right, caught him with that overhand right, he fell down, and finished up with a couple hammer fists.”

That was all she wrote. Taking the fight short notice was made a little easier by the fact that Lilley had been scheduled to fight at the end of the month. That card, outside of LFA, fell through, however.

“My manager said ‘Hey stay ready.’ I stayed ready, we got a call on two weeks notice,” Lilley told us. “It was a blessing in disguise, like my dad always said, one door closes and a bigger opportunity comes up. We jumped onboard.”

Knowing that there were two spots open on the LFA 45 card, including the co-main event, Lilley said yes immediately. “I didn’t even get a name,” he told us.

Having made a big splash in his debut, however, you can be certain you’ll be hearing more of his name. 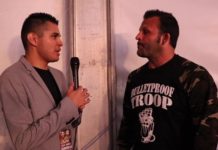 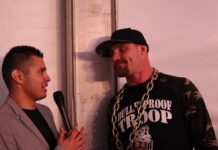 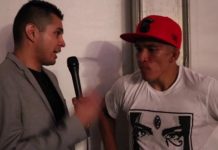 Vincent Cachero Breaks Down His Dominant Victory at LFA 45