Kristina Williams’ rise in Bellator MMA over the course of just two fights has been nothing short of meteoric. Now, in just her third fight, ‘Warhorse’ will face a former UFC title challenger — her biggest test to date.

Kristina Williams vs. Valerie Letourneau is the kind of fight, on paper, that looks like lopsided matchmaking. But then, so did Williams vs. Emily Ducote, and Williams, potentially a huge star in Bellator MMA, proved the oddsmakers (and any other doubters) wrong. On Friday at Bellator 201 she has a chance to do that again against ‘Trouble,’ and Williams (2-0) is showing no fear. Well, maybe just a little, but only with reporters.

“Her ground game is great. Her stand up, her counter-striking is really amazing,” Williams said of her opponent, speaking to the assembled media Wednesday. As to what she has to do to combat that, “just a lot of movement, and making sure I use my weapons really well. My elbows, and on the ground, I’m definitely a lot better than I was before. So that’s something I’ve been working on too.”

She’s taken some lessons from that last outing against Ducote. “Emily was a super tough opponent. I learned a lot in that fight,” said Williams, “and I think that I’ve improved a lot on everything I wasn’t doing in that fight. So I think that fight pushed me a lot as far as just growth.”

Kristina Williams has certainly come a long way in a short time as a fighter, something she touched on later — as well as her nerves in front of the media. This, from a girl who can dismantle opponents physically and mentally in a cage fight. “It’s been crazy.  I still feel really weird about it,” she said of her quick rise to stardom. “Because last year at this time, I almost just fought my last amateur fight. So it’s been less than a year. It’s been kind of wild, especially the media stuff.” As for being the underdog in all her fights to date, that suits Williams just fine. “I kind of like being the underdog, because I feel like it takes pressure off of me. And I just perform as well as I can and fight as hard as I can.”

‘Warhorse’ has had her brother’s support throughout her MMA career, and he’ll be on hand Friday. “He supported me the whole way through,” she said of her sibling. “He’s going to be up here for this fight. He’s so proud of me. He’s always ragging on me, so its been awesome.”

As for the chance to fight someone like Valerie Letourneau, with a potential title shot on the line, “it means a lot. I think it’s going to show me a lot about myself.”

“Every fight I get built up more. It shows me where my holes are. Win or lose, this fight is going to show me where I need to work,” Williams told us.

What might come next? How about a women’s grand prix? “That would definitely be awesome,” Williams said of the idea. “I think that Bellator’s women’s MMA has grown so much even in the last year. It’s definitely possible for something like that.”

Kristina Williams takes on Valerie Letourneau on the main card of Bellator 201 this Friday, June 29 in Temecula, CA. The event airs free on the Paramount Network kicking off at 9PM following the early prelims online at bellator.com. 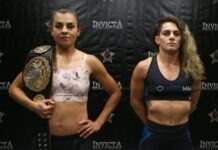 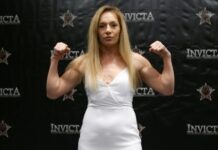