Donald Cerrone is expecting another fire fight at UFC Singapore, and he’s facing a young fighter eager to break into the spotlight in Leon Edwards.

The welterweight division is currently enjoying one of the best stretches of the last several years.  In the past month alone, Kamaru Usman, Darren Till, and Colby Covington took steps forward in the division.  But this Saturday, another pair of welterweights look to improve their standing as UFC veteran Donald Cerrone looks to turn away up-and-coming English contender Leon Edwards.

Earlier this year, there was question if Donald “Cowboy” Cerrone had finally burned the candle at both ends for too long.  His reputation as an active fighter had followed him for years and his penchant for getting into toe-to-toe battles left many wondering how much longer it would be before his the wear-and-tear caught up to him.  To his credit, he is currently tied with Michael Bisping and Georges St-Pierre for the most wins (20) in the UFC despite having several years less than both men in the organization.  But, when he entered an 0-3 skid against the likes of Robbie Lawler, Jorge Masvidal, and Darren Till, it looked as if his streak of brawling his way back into contention may have been over.

He answered questions about his longevity earlier this year, stopping the game Yancy Medeiros in one round in February.  It stopped the critics who said Cerrone’s time with the elite talent in the UFC was done, but the fact remains he is firmly in middle of the pack behind the division’s surging contenders.  At 35 years old, and with a career approaching 12 years and over 40 fights, does “Cowboy” still have another title run in him? It will be no easy task, his 4-0 2016 came at a time when none of the division’s current elite were on the radar.  Now, he will have to survive a shark tank of talent if he’s to get back to a possible shot at UFC gold.

Leon Edwards isn’t one of those elite contenders yet, but similar to Darren Till last year, he will look to enter the conversation with a win over Cerrone.  A former BAMMA welterweight champion, Edwards boasts an impressive 7-2 record in the UFC since joining the promotion in 2014.  Of his two losses, one was a decision to current top contender Kamaru Usman back in 2015.  Now on a five fight win-streak, Edwards is ranked #15 in the promotion and a victory could well propel him into a top ten berth.

The 26 year old has made no secret that he feels he is getting Cerrone at the perfect time. In an interview with MMAFighting, Edwards stated “These older heads are there for the picking now.  They’ve still got the name, they’ve still got the clout, but they are maybe more beatable than they once were. They’ve had their turn at the top of the division and now it’s our turn.”

Cerrone for his part feels that Edwards is trying to talk himself up now that he is in the position of headlining a UFC event.  In an interview, Cerrone said “He’s a real arrogant, cocky motherf***er, to be honest with you.  So, I don’t know, we’ll see, but I’m not too impressed with him at all.”

Stylistically, Cerrone is going to have to overcome a versatile attack from Edwards.  The Englishman mixed in his striking and grappling in his last outing against Peter Sobotta and could pose problems for “Cowboy.”  Cerrone has an excellent submission game that has seldom been seen in recent years, but he could likely find himself needing to utilize it should Edwards manage to get the fight to the ground.  On the feet, both men have showed a willingness to exchange with a full arsenal of punches, kicks, and knees so getting the better of the stand-up will come down to managing accuracy and output.

A win for Leon Edwards will put him into the lower half of the top ten in the welterweight division where names like Santiago Ponzinibbio, Neil Magny, and Jorge Masvidal are ahead in the standings.  For Donald Cerrone, the fight would inject much needed momentum into this chapter of his career.  A victory over a young contender like Edwards would go a long way toward helping him work his way back into the pack of the top ten. 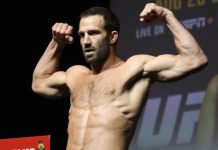