The monkey is off PFL 2 headliner Will Brooks’ back, as he scored a unanimous decision win in the main event in Chicago on Thursday.

Former Bellator MMA lightweight champion ‘Ill’ Will Brooks got the win on Thursday at PFL 2 in Chicago. That snapped a three-fight skid that ended his UFC tenure. What he didn’t get was a finish, which could have awarded him up to three points in the PFL’s 155lb tournament. Still, he’ll take the base three points for the win, as he explained post-fight in Chicago.

“We definitely knew he was very tough, just watching some of his previous fights,” he said of Luiz Firmino. “With Justin Gaethje, that’s one fight we kept looking at and kept going back to. Just recognizing how tough the guy was, and how much pressure he could take and put on you, and how much of a beating he could take.”

“We just knew that we’d end up having to fight all fifteen minutes,” he said of the bout going the distance.

Brooks was happy with the performance, saying that “we did a great job tonight. Just getting back in the win column is what I kept saying, kept working on. Let’s just get back to winning. That’s what we tried to do tonight.”

There were times Brooks felt the finish might have been close, but ultimately it didn’t come. “It wasn’t just thinking about getting back to a win, it was understanding what kind of fighter we were going against,” he said. “Competing against a guy that was extremely tough. I hit him with a bunch of jabs, I hit him with a jab-cross, a lot of heavy punches, he just kept coming forward. We were expecting that.”

“The whole idea of just winning, wasn’t just because ‘we’re on a losing streak, we gotta get back.’ The dude’s not going to let you finish him. He’s not going to make it that easy,” he finished.

If you notice Brooks continually referring to “we,’ well that of course is his coaching staff, who could be heard giving some spot-on advice between rounds. Was that something he was able to take in? Brooks stated that “my coaching staff, my coaches are incredible at communicating. They know me, they know that they’ll never have to scream and yell things over and over and over again, they only have to say it once and I’ll get the job done. Before getting into the fight, before even walking out of the locker room, we have a good idea of what we need to do.”

Check the full PFL 2 post-fight press scrum with Will Brooks above! 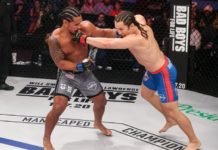 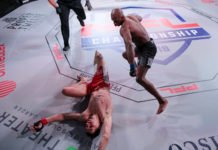 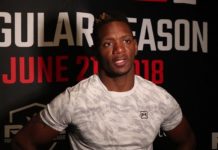