Another five fights went down Tuesday as up-and-coming prospects in the MMA world looked to fight their way into the UFC on DWTNCS.

Dana White’s Tuesday Night Contender Series (DWTNCS) returned for another installment, with the second edition of the second season airing Tuesday, June 19. In the featured fight slot was American featherweight Matt Sayles, taking on undefeated Palestinian Yanzan Hajeh. Featherweight would be the only weight class that would appear on the card twice, as Georgia’s Giga Chikadze would face Austin Springer of the U.S. earlier in the night.

Welterweight, middleweight, and light heavyweight bouts would also feature on the card. And while it lacked the star power of the show’s season opener (which included controversial heavyweight Greg Hardy), the night still held plenty of promise in terms of action.

Check back come fight time (8PM EST) for a full recap and results from the night’s action.

Kicking off the 10th edition of Dana White’s Tuesday Night Contender Series was a welterweight scrap between Dwight ‘The Body Snatcher’ Grant and Tyler Hill. Grant looked to work his jab early, and attacked the legs as the round progressed. Hill was game, and happy to walk forward, only to eat counter lefts from Grant as he circled out of harm’s way. Grant appeared to be getting the better of the exchanges, but Hill walked forward despite eating a number of big shots. By the mid-way point, no one had shown any signs of taking the fight to the ground. Hill worked to cut off the cage, and would go to the body with a kick, but another low kick was caught, and Grant came close to dumping Hill on his back. Hill was showing damage by the right eye, and the round finished with a final exchange.

Hill continued to push the pace in round two, with Grant settling more and more into the counter role. He soon found himself on his heels, however, with Hill having more success landing early in the second. A hard right hand, however, dropped Hill as he was coming in, marking the most significant strike thus far, in favor of Grant. While Hill would recover, moments later, Grant would land a blistering right hand, follow up with a looping left hook, and drop Hill for good!

Ryan Spann wasted no time in finishing Emeliano Sordi in the second bout of the evening at DWTNCS 10. A light heavyweight contest, Spann was getting a second chance on the show, and made the most of it. He connected with a counter-right early that dropped Sordi. In the scramble that ensued, Spann locked in a guillotine choke, and it wasn’t long from there — Spann had the win in under thirty seconds!

Georgian Giga Chikadze took on his toughest competition to date in the form of Austin Springer in the first of two featherweight bouts on Tuesday night. A highly touted kickboxer, Chikadze came out in a southpaw stance, firing off three kicks at three different levels within the first thirty seconds. A fourth kick grazed Springer’s head; Springer imediately initiated a clinch. However, the American was unable to land a takedown, and once they had some separation, Chikadze landed a short punch that sent Springer stumbling backward. The Georgian then got a little reckless, launching a flying knee attempt only to be taken down. Giga threw up a triangle attempt that was easily defended by Springer. Spring worked in punches to the body, while Chikadze connected with an elbow from the bottom. However, Spring, perhaps frustrated, backed off, only to eat an upkick. In the final minute, Chikadze scrambled back up, only to be taken down again; he’d look for an omoplata, and pop back up in the final seconds of the frame.

In the second, Chikadze went to the body after flashing a low kick, but Springer was able to catch it. Giga followed with a left hook, which his opponent answered. Key for Chikadze would be to keep the fight standing; Springer would soon clinch and work for a takedown to no avail. Chikadze would continue to chop away at his opponent with kicks, but with ninety seconds or so remaining, it was Springer with a key double leg takedown. He quickly moved into half-guard, pinning Chikadze against the fence. After being forced back into full guard, however, he’d be unable to keep Chikadze down. A cartwheel kick attempt by the Georgian ended the round.

Round three saw Giga continue to chop away at Austin Springer, who answered back with a kick of his own. Springer ate a couple of solid shots, but continued to look for a takedown, driving Chikadze into the fence near the halfway mark of the round. Chikadze answered with a series of elbows to the head, and Spring re-grouped. He’d later shoot for a single leg, nearly eating a knee in the process. Looking for an arm-triangle choke, he’d move to mount and begin unloading ground and pound, with Chikade flailing then giving up his back. That turned out to be a critical mistake — Springer quickly sunk in a rear-naked choke, earning the tap seconds later!

Anthony Hernandez took care of business early at DWTNCS 10. A right hand connected just seconds in, with Wright trapped against the cage. Wright turned away from the blow, only to eat several more that sent him crashing to the canvas. A few more strikes as he was on the way down, and it was all over.

In the featured fight, Yanzan Hajeh opened with a front kick, but ate a right hand shortly after while changing stances. Sayles connected with a leg kick, with Hajeh broke out some flashy kicks that failed to hit the mark. Hajeh tried to roll into an arm-bar, but moments later, with the pair back on the feet, he’d be dropped by a right hand. Sayles pounced, dropping blow after blow while the ref urged Hajeh to keep moving. Hajeh would survive for a time, but eventually it was too much, and the ref waved it off!

And Matt Sayles drops Hajeh early in this one! #UFCFIGHTPASS pic.twitter.com/ugXSgMUvhT

With so much action and all five fights ending in finishes, UFC President Dana White ultimately elected to award four contracts at the end of the night — a first for the contender series. As a result, Dwight Grant, Ryan Spann, Anthony Hernandez, and Matt Sayles will all join the UFC in the near future! 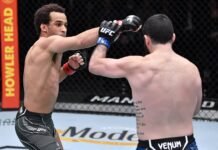