UFC Vetran Andrei Arlovski Stepped into the octagon once again at UFC 225 on Saturday night. After returning to the UFC and going onto a four fight win streak, Arlovski faced a change in momentum that saw the ex-champ drop his next five. Then, the legendary heavyweight bounced back to win his last two. Saturday “The Pitbull” faced his latest challenge when squared off against the undefeated Australian Tai Tuivasa. Tuivasa had found himself undefeated since joining the UFC and when he stepped into the cage at UFC 225, but he faced the biggest challenge of his career in Arlovski.

Round one saw Tuivasa open up with a right; Arlovski answered with a leg kick. Tuivasa fired back a leg kick of his own and Arlovski landed another kick to the leg. The two went to exchange and Tuivasa locked the clinch and took Arlovski to the mat. Tuivasa got in mount, Arlovski defended holding Tuivasa down. Tuivasa looked to adjust possition and Arlovshi sprung up. Tuivasa is bleeding but he lands a hard shot sending Arlovski to the mat. Arlovski get to his fee and the two continued the exchange working over into the cage. Arlovski came forward with an elbow on the break and Tuivasa answered. Arlovski looked like he might have taken an eye poke but the action continued with both fighter landing shots as the round ends.

The second round began, and Arlovski was throwing the jab followed by a leg kick. Arlovski landed multiple leg kicks and tried for a hight kick upstairs. They exchanged and Arlovski landed a couple good rights. Tuivasa kept moving forward to engage, driving Arlovski into the fence, but Arlovski is quick to escape. Arlovski landed more rights and Tuivasa’s face was showing the damage. Tuivasa lunged forward with a flurry that sent Arlovski back into the cage, he pursued his opponent and Arlovski spun to put him into the fence. They broke and exchanged. This time the ref stopped the action due to an eye poke. Action resumed and Arlovski drove forward only to be met by a stiff right that stopped him in his tracks. The next exchange saw Arlovski go for a spinning backfist that Tuivasa ducked to avoid.

Tuivasa opened the third with a leg kick, which Arlovski answered with one of his own. Tuivasa came out with a jab to Arlovski’s body and Arlovski shortly answered with a  left. Tuivasa came in with a shot to the body that Arlovski answered with a flurry. Tuivasa looked to work in some shot elbows that Arlovski avoided. Arlovski went with a high head kick that just missed. Tuivasa looked like he was looking for an overhead right. Tuivasa rushed forward with a flurry, landing a right and stunning Arlovski. Arlovski escaped and rushed in with his own flurry. The two separated, and Arlovski went for another spinning back fist that Tuivasa avoided. Tuivasa landed a left, right combo as Arlovski circled away just as the round came an end. An impressive fight, with both men getting in some good offense, but Tai Tuivasa took it on the scorecards. Though Joe Rogan would decline to hand over his shoe for Tuicasa’s “shooey” celebration after the fight, Tuivasa would find one from the crowd. 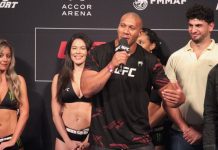