David Teymur edged past Nik Lentz at UFC Utica on Friday. Yet despite earning the win, the bulk of the debate coming out of the fight will be on point deductions, or the lack thereof.

In another lightweight battle at UFC Utica, Nik ‘The Carny’ Lentz faced off against David Teymur. David was the first of the two Teymur brothers to enter the octagon on Friday, as brother Daniel was also in action later in the evening. First up, however, it was Nik Lentz vs. David Teymur, with both men coming in off wins.

However, while Lentz had been trading wins and losses of late (most recently picking up a victory over former Bellator lightweight champ Will Brooks), Teymur had never been defeated in the UFC. In fact, he was on a seven fight run prior to meeting Lentz, having not lost since his professional debut in 2013.

Teymur would fire off a pair of kicks upstairs within the first minute of this lightweight scrap, setting the tone early. Lentz would move in, only to be dropped by a crisp left hand. Lentz, however, recovered quickly, and went right back after his opponent. Teymur went to the body with a kick, and continued to go upstairs with them as well. Lentz answered with a leg kick, then tried to close the distance and tie Teymur up. To no avail. Lentz would catch a kick and move in for a takedown with just over two minutes remaining, only for Teymur to burst right back up to this feet. Lentz would drag him down again, while suffering a pair of eye pokes which elicited a warning from the ref — but no recovery time. A fence grab also added to the controversy, but they’d ultimately go to a second round.

Round two saw the pair trading leg kicks, while Lentz continued to walk down his opponent. However, despite pushing the action, he was losing the striking battle. He’d try for another takedown, nearly land it, but Teymur was back on his feet in the blink of an eye. Teymur had a head kick sail just a little high at the midway point of the fight; the pair appeared to have settled down a little by that point.

Round three saw Nik Lentz continue to try to puzzle out the Rubik’s cube that was David Teymur. He was gradually finding more success with his grappling, and threatened with a guillotine. Teymur slipped in another fence grab in the third round, earning a warning, but it allowed him to stay on his feet, without consequence. Throughout the remainder of the round, Teymur would fire off the odd spinning attack, combo, or high kick, while a bloodied Lentz remained on the outside. If there was anything to be learned, it’s that MMA is in desperate need of consistent reffing and point deductions for infractions — but that’s a debate for another day. In the meantime, Teymur took home the decision, and called for a top ten opponent after the bout. 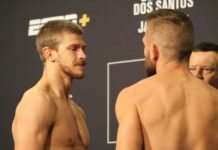 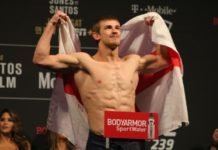 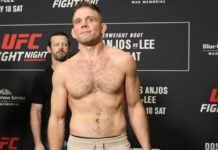