KGB Lee was aiming for a bonus ahead of UFC Fight Night 129 — and she delivered, sharing Fight of the Night honors with opponent Veronica Macedo.

In a debut months in the making, Andrea Lee finally stepped into the octagon at UFC Chile. Otherwise known as UFC Fight Night 129, the event marked the UFC’s debut in Chile. Taking place at the MoviStar Arena in Santiago, Chile, it was also the promotion’s first South American show outside Brazil. And to top off the list of firsts, it was KGB Lee’s UFC debut as well.

The flyweight star, a former LFA champion and Invicta regular, did not disappoint. Battling it out with Veronica Macedo for a full three rounds, their back and forth affair, punctuated by crushing knees from KGB, was enough to earn Fight of the Night honors. It’s a win that should also see Lee immediately ranked in the fledgling women’s 125lb division, come mid-week when the UFC’s official rankings update.

The win is a win for the promotion as well, as they’re always on the lookout for their next star. Andrea Lee could be just that.

Performance of the Night bonuses at UFC Chile, meanwhile, went to Gabriel Benitez and Claudio Puelles. Puelles helped kick off the card on the UFC Fight Pass prelims. After being rocked repeatedly on the feet, Puelles pulled off a Hail Mary kneebar submission in the third round, capturing the win in a fight he was clearly losing.

Benitez, meanwhile, finished Humberto Bandelay with a slam KO after dropping his foe early in the first round. 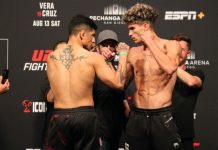 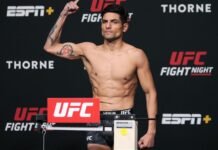