Atlantic City, NJ — Frankie Edgar and Cub Swanson’s rematch at UFC Atlantic City on Saturday had a main event feel, regardless of its spot as the penultimate fight of the night. Edgar, fighting at home for the first time in over a decade. Swanson, like Edgar, looking to bounce back from a finish at the hands of Brian Ortega. With a new contract in hand, and twins on the way no less. The atmosphere electric, the crowd nearly drowning out announcer Bruce Buffer.

The ‘Frankie Edgar’ chants broke out early on as the pair circled, a dance that tends to open up nearly every UFC (nay, MMA) bout. Edgar had the fans in his corner, but had a considerable army of critics as well, insistent as they were that he was making his return off a UFC 222 knockout by Ortega too soon.

The first takedown attempt by Edgar came just past the halfway mark; Edgar, always brimming with determination, refused to let the single leg go, only for Swanson to shake it off anyway. If there was a takeaway from round one, it was that Edgar was still an elite fighter. Still able to draw blood against a wily veteran like Cub Swanson. And draw first blood he did, with Swanson leaking a trail of bloody tears from one eye.

Swanson connected with a leg kick followed by a spinning kick to the dome of Edgar late in the round, but ‘The Answer’ persisted.

If there was a theme to the second frame (besides the recurring wish that Swanson vs. Edgar 2 were a five round fight), it was the lack of wrestling from Edgar. Instead, he fired off numerous head kicks. Pressed forward, with that awkward, herky-jerky style fans have come to know and love. Swanson seemed to have no answer for ‘The Answer.’ Just like so many before him. Just as was the case in their first fight. ‘Killer Cub’s’ best attacks were his leg kicks, but by the third, he was two rounds down, and needing a finish.

Five rounds sure sounded good right about then.

In a longer bout, the third round might have been a turning point; in this three round affair, it seemed a formality. Swanson took over as the aggressor at times, ducking and feinting and looking for a way to trap Frankie Edgar. Edgar, however, wouldn’t allow himself to be trapped, no matter how Swanson tried to cut off the cage. Late in the round, a standing knee by Cub connected with Frankie’s chin as Edgar pressed his foe against the fence; Edgar ate the blow without too much difficulty. Chin questions answered. Too soon questions answered. They’d rattle off a few exchanges in the final minute, but it mattered not. Edgar had it in the bag.

Afterward, he told Cageside Press during the post-fight scrum that his reliance on striking wasn’t necessarily intentional. “I think Cub did a good job of just evading,” Edgar told us. “He did a good job of keeping that distance, keeping his range. I got a hold of him a couple times, not that he was slippery, like he shaved his whole body or something, I just had a hard time getting a hold of him. Credit to him.”

But in the end, Edgar was able to adjust. “I always try to say, if I can’t take someone down, I’m going to be able to outstrike them. Tonight I was able to do that.”

The takeaway from all this, again outside of wishing it went twenty-five minutes rather than fifteen, is that yes, Edgar remains an elite fighter. It’s a question even he was asking fight week. Through the death of his father, a stunning knockout loss, and the pressure of coming home after so long, Frankie Edgar answered his critics, definitively, at UFC Atlantic City. 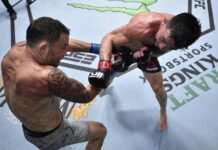 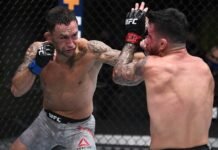