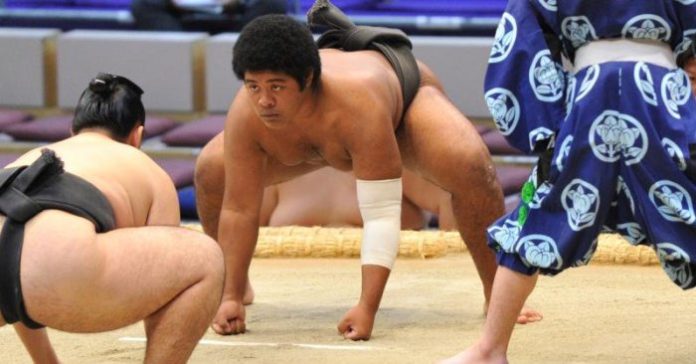 While this is an MMA-based website, we respect all martial arts and were able to interview an American sumotori named Ichiro Young.

Cageside Press decided to a break from the usual MMA rabble and spoke with a young sumotori from Houston named Ichiro Young. He made his debut back in 2016 and has since picked up the ring name “Wakaichiro” which translates to Young Ichiro. Sumo wrestlers are held in high esteem in Japan and the sport’s origins can be traced back to the 16th century during the reign of Oda Nobunaga.

Let’s go into your background first. Is there anything you want to say about your childhood, upbringing, maybe a detail about your parents that may have played a part in you getting into sumo? Stuff that’s not on your Wikipedia page.

Well my background is very unique to say the least. I have a black father and a Japanese mother. I grew up in the suburbs of northeast Houston in the Humble/Atascocita area. At the age of about 8, my parents got divorced and eventually remarried. My mother to an Englishman from Yorkshire, and my father a woman from Grand Rapids, MI. So my family is very culturally diverse. Ever since I could remember, my grandfather and mother always told me I should become a sumo wrestler when I grow up. They said that because I was always short and stocky as a kid so really the ideal body for sumo.

As a child, I started playing sports from the young age of 4. The first sport I played was baseball. I played baseball until the age of 9. For baseball, I can’t really think of any skills that could translate well to sumo. I played football from the age of 9 until 14, right until the last year of junior high. For football a lot translates, especially for the position I played as a lineman. The whole staying low and planting your feet thing is almost the exact same as sumo. Eighth grade was the last time I played football. The reason for me not playing sports in high school was because the high school I went to was a early college high school. So when I graduated high school I finished with my Associates in Science. My school couldn’t offer any sports because of the heavy work load.

What’s the hierarchy of a sumo academy? What’s your day to day and training like?

When you say sumo academy I’m assuming you mean a sumo stable. The place where we train and live. Now the hierarchy is very simple. At the very top is of course our stable master, or Oyakata. He is the one that oversees everything in the heya from practice to our daily schedules. Next in the hierarchy is the Okamisan. The Okamisan is the wife of the Oyakata. She is basically responsible for the well being of all of the wrestlers. She’s basically like the stable mom. Now when it comes to us wrestlers, the structure is very simple. It goes by how long you have been in the stable. So at the time of you joining the people that were there before you are called your anideshi (senior wrestler). Which means a person above you in seniority. Rank also plays a part in the hierarchy at other stables, but at my stable it doesn’t play that big of a part. It only makes a difference once you make it to juryo and become a sekitori that you get to boss anyone around and anideshis that are below you in rank.

Now the typical day at my stable goes like this: Wake up at 7 a.m. to get ready for practice. Now all of us are split into groups for the chores, so if you are part of the kitchen group for the day, then you typically wake up around 6 a.m. to prep for lunch after practice. Practice is at 8 a.m. If we are not wrestling, practice only lasts about 1.5 – 2 hours. If we are wrestling, practice lasts about 3 – 3.5 hours. Once practice is over, we clean up the practice area then the kitchen group I mentioned earlier goes straight to the kitchen and gets lunch ready. Everyone else cleans up and showers to get ready for lunch. This lunch is the first meal we eat for the day. Because our practice is in the morning we don’t eat breakfast. And we only eat twice a day. We usually finish around 12 p.m. The people that don’t have kitchen duties then can go upstairs to the common area and relax and do whatever until 3 p.m. People usually take naps during this time. 3:00 is cleaning time. Everybody has an assigned cleaning area/job. Once cleaning is done we can relax again until 6:00, which is dinner time. If you are kitchen duty for the day, however, you have to start preparing and cooking for dinner right after cleaning is done. Once we finish eating dinner we then can do whatever again until 10:30 pm which is lights out. Then we continue the cycle everyday.

Most people are familiar with judo and wrestling’s format of competing several times a day. Does sumo do that or is it only once a day? Describe the tournament format and opening ceremonies.

For sumo we only wrestle one time a day. So this is how a tournament goes. They last 15 days and for us lower guys (not sekitoris) we only wrestle seven times spread out over those 15 days. Sekitoris wrestle everyday for the whole two weeks. I don’t really know much about the opening ceremonies but I know they all happen on the first day.

What are your long-term goals? You’re pretty young so have a lot of time ahead of you. Would you consider jumping into another combat sport like MMA like Baruto Kaito?

I really don’t have any long term goals as of now. Of course, I have a goal of becoming a sekitori. As for considering another sport, at this point in time I really don’t know.

Anything to say to your growing American fan base? I know there was a competition wrapping up this week (was 2-0 at time of interview). When is your next competition and how may people watch you?

The only thing I can say about my fan base is I had no clue I even had one in America until I found out about Tachi blogs. All I can say is that it is truly humbling, I never would have thought in one million years I would have fans. I’m just a ordinary guy from Houston, Texas. As for my next competition my next tournament is in May and it’s in Tokyo.  For the people stateside they really are just at the mercy of people posting videos on YouTube or social media. But for people that have a VPN there is this app called Abema tv and you can live stream the tournament from the beginning everyday, and it’s free.