MMA and pornography have crossed paths in the form of CamSoda Legends, an event promoted by an adult film website.

The award for most shocking and least expected MMA event of the year can already be handed out and it’s not even April. Tuesday, it was announced by popular adult site CamSoda that the company was getting into the MMA business. They’ll be hosting their first (MMA) event in Florida.

CamSoda Legends MMA goes down April 26 with a main event of former UFC Heavyweight Champion Ricco Rodriguez taking on former UFC middleweight Alex Nicholson. Nicholson (9-5), while mostly fighting at middleweight, has fought at light heavyweight as well as heavyweight in his career. The Spartan lost his last fight under the LFA banner; however, he does have wins in three of his last four.

Ricco Rodriguez, on the other hand, has one win in his last five fights. Rodriguez, a former UFC heavyweight champion who was on top of the world after defeating Randy Couture at UFC 39, is in the twilight of his career and likely to retire soon. It would’ve been hard to imagine in 2003 that it would come to this in 2018.

Depressing Rodriguez talk aside, the card also boasts other notable names. The biggest arguably being Charles “Krazy Horse” Bennett. The man now known as “Felony,” possibly due to his multiple arrest charges, currently holds a record of 29-35-2. Not a stellar record, but Felony is loved by the fans for his entertaining fighting style and crazy antics inside and out of the octagon.

Bennett has not won in his last seven fights. Krazy Horse got his name back on the map in 2016 by getting a highlight reel knockout in RIZIN FF, then calling out Wanderlei Silva on the mic. Since then, he’s been unable to find the win column. Instead of fighting Silva, he’s fighting Titan FC veteran Bruce Lutchmedial, who is 5-3 in his MMA career.

A weird card for sure, but possibly one to watch. 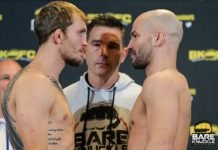