Kelvin Gastelum and Jacare Souza are set to throw down later this year in Rio.

UFC Middleweight action is set for Rio de Janeiro this May, the promotion announced on Thursday. That’s because Ronaldo Souza, better known as ‘Jacare’ will be taking on Ultimate Fighter winner Kelvin Gastelum at UFC 224. The booking comes at a time when the UFC’s 185lb weight class is in turmoil. After champion Georges St. Pierre seemingly fixed a log jam by vindicating the title, allowing for interim champ Robert Whittaker to become the undisputed king, things pretty much went sideways. Whittaker wound up injured and forced off UFC 221; an interim title fight between Yoel Romero and Luke Rockhold, cooked up to salvage the card, wound up being a non-event when Romero missed weight. That made only Rockhold eligible to win the interim title. Which the MMA Gods then saw fit to take advantage of, as Romero got the win, and finish, in their main event fight.

The end result is a division that is awaiting a rematch between Whittaker and Romero that seems wholly unnecessary. After all, the pair fought just last Summer for the interim title. Jacare Souza, however, has established himself as the next top contender in the division, having picked up a statement win against Derek Brunson at UFC on FOX 27. The only problem for Jacare (25–5 (1)) is that he also suffered a recent loss to Whittaker.

Which could be a fortuitous situation for Kelvin Gastelum (14–3 (1)). Gastelum, bounced from the welterweight division after ongoing issues making weight, has found a new lease on life in the 185lb class. He’s 2-1 (1NC) in the division. That No Contest, however, was originally a win over Vitor Belfort. That win was later overturned due to a drug test failure for marijuana.

Gastelum will head into UFC 224 off a big knockout win against former champion Michael Bisping at UFC Shanghai last November. A second high profile win could very well propel him to title contention in a division in turmoil.

UFC 224 takes place May 12 in Rio de Janeiro, Brazil. Lyoto Machida will also take on fellow legend Vitor Belfort at the show. UFC 224 does not yet have a main event announced. 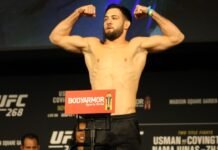