Jake Matthews dominated his opponent at UFC 221 in Perth Saturday — and endured a nasty foul in the process.

Australia’s own Jake Matthews took on China’s Li Jingliang, a.k.a. ‘The Leech’ in main card action at UFC 221 on Saturday night. The welterweights were the second fight in on the PPV, and looked to put on a show in Perth, Australia.

At just 23, ‘The Celtic Kid’ Matthews had a tough test against Jingliang. Off the opening bell, the pair circled, looking for an opening. ‘The Leech’ showed a lot of movement, and came in with a leg kick. Moments later he’d eat a right hand, however. Matthews then added another right seconds later that stunned Jingliang, though he did not go down. The Chinese fighter continued to push forward, and was able to land a right of his own. However, on the attack, he was caught by a counter and dropped. Jake Matthews immediately got into a high mount and began dropping punches. Jingliang could do little more than cover up and roll over, giving up his back. Matthews had hooks in, and was throwing right after right from his back. Matthews rolled Jingliang over briefly, trying to flatten him out, but the round would come to a close before he could find a finish.

Round two saw Matthews caught by an uppercut early, but he landed a punch of his own and immediately locked in a guillotine. It was tight, but Jingliang escaped, mostly by illegally raking his opponent’s eyes. Despite the ref being right on top of them, no point was taken. Jingliang then landed some hammerfists, before Matthews escaped back to his feet. Matthews was bloodied, and the pair began swinging wildly, with Matthews going for the fences. Unable to land, however, they settled down with Jingliang stalking his opponent. He soon had him trapped on the fence, with Matthews using head movement to avoid shots. This repeated itself in a brief game of rock ’em, sock ’em robots towards the end of the frame.

In the third, Matthews scored a takedown early, and landed a number of left hands as Jingliang fought back to his feet. Towards the middle of the round, Matthews then dropped his opponent with a right hand yet again. ‘The Leech’ proved to have a heck of a chin, and actually fought his way to top control, but Matthews was pulling away on the scorecards. Jingliang would need to find a finish with ninety seconds remaining in the bout. It wasn’t there, and Matthews added the final “did you see that?!” moment of the fight with a flying knee. 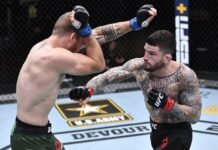