Kyle Bochniak put on a professional performance in front of his hometown crowd, defeating talented prospect Brandon Davis via unanimous decision at UFC 220 in Boston.

Featuring a couple of fresh-faces at featherweight, the bout between Brandon Davis and Kyle Bochniak gave one fighter the opportunity to take a step toward challenging the top-10 in one of the the UFC’s deepest divisions. While Bochniak had some UFC experience under his belt, and Davis was making his debut, it was the newcomer who was the betting favorite heading into Boston.

Davis came into the bout with an 8-3 record. The 27-year-old Mississippi-native came into the bout after earning his UFC contract last summer. Davis defeated Northwest prospect Austin Arnett via decision, impressing promotion President Dana White enough to earn his shot at the big-time.

Bochniak, meanwhile, had competed three times in the Octagon in his nine career professional fights. The 30-year-old Boston-native was 7-2 in those nine fights, and 1-2 since joining the UFC in 2016. Bochniak fought once in 2017, losing a decision to highly-touted prospect Jeremy Kennedy.

Bochniak stayed on the outside early, giving Davis control of the center of the Octagon throughout the opening minutes. The first exchange came 90 seconds into the bout, with neither fighter able to impose their will early on. Shortly thereafter, Bochniak landed the first real significant strikes of the night, landing his left hook flush a couple of times midway through the first round. Bochniak then shot for a takedown, forcing Davis against the cage and taking top control, but only for a second. He continued to press Davis against the cage, but was unable to turn it into any offense of note as the first round came to a close.

Bochniak came out a bit more aggressive in the second round, landing a combo in the opening seconds. The Boston native continued to work outside, staying out of Davis’ range. Davis was able to land a couple of quality leg kicks in the first minute, but Bochniak was able to land some punches as well.

Davis continued to take punches, and Bochniak leg kicks, but neither duo was able to take a distinct advantage in round two. Davis then stuffed a takedown from Bochniak, and went back to patrolling the center of the Octagon. Bochniak’s movement wasn’t slowed, however, as he continued to land counter punches. A spinning back fist attempt form Davis allowed Bochniak to take his back and push him against the cage late in the second round, but Bochniak was unable to turn it into anything of note, and Davis once again had the fight standing.

The final stanza was more of the same. Davis landing leg kicks, while Bochniak landed counter punches. Bochniak continued to shoot for takedowns and control the fight, while Davis was able to stay out of dangerous positions defensively.

Kyle Bochniak improved his UFC record to 2-2, earning a decisive victory over promotional newcomer Brandon Davis. The unanimous decision may not have been the most exciting fight of the night, but showed Bochniak belongs in the UFC. For Davis, his debut was dampened. But, this won’t be the last we see of the Dana White Tuesday Night Contender Series vet. 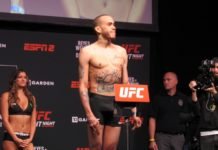 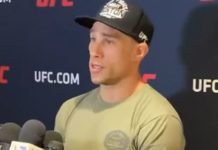