UFC on Fox 25, more commonly known as UFC Long Island, took place Saturday at the Nassau Veterans Memorial Coliseum in Uniondale, New York. In the main event of the evening, middleweights Chris Weidman and Kelvin Gastelum collided in a key bout for the 185lb division. Former champ Weidman was looking to break a three-fight losing streak, while Gastelum was looking to keep momentum going in his new home after moving up from welterweight.

Early in the night, a number of intriguing fights went down on UFC Fight Pass during the online prelim portion of the broadcast. Breakout bantamweight Brian Kelleher returned to action, while heavyweights Timothy Johnson and Junior Albini collided. In the featured Fight Pass prelim fight, featherweights Kyle Bochniak and Jeremy Kennedy threw down.

Check back come fight time for results and a recap of all the night’s action.

Lightweight action opened up the UFC on Fox 25 card, as Long Island local Chris Wade took on Frankie Perez. Wrestling was the story of the fight early, as much of the bout was spent in the clinch, with grappling being key. The first turned out to be a close round, and it was obvious that the winner was going to be whoever spent less time on his back.

In the second, Perez looked to keep things standing and mix up his strikes, going upstairs with a number of kicks. Wade, however, continued to work on the grappling side, and initiated the clinch against the fence. They would trade takedowns in the round, with Wade spending plenty of time in top control.

The third round offered more of the same, and ultimately, this one went to the judge’s scorecards. All three judges saw it in favor of the Long Island native, with Wade taking the unanimous decision.

Featherweight action was up next. Burgos and Pepey went through an active feeling out process early in the first. About midway through the round, the action really got going. On a takedown attempt by Pepey, a big knee by Burgos punished the Brazilian, knocking him to the mat. Burgos refused to engage on the ground, forcing Pepy back to his feet where he clipped him again. The pair then clinched along the cage. Pepey still looked a little wobbly, but he would continue to try to shoot on Burgos, to no avail. Pepey looked to be putting everything into the strikes he did throw, telegraphing shots that Burgos easily avoided.

In the second round, the pair continued to exchange, with Pepey continuing to level change and threaten the takedown. He was, however, looking extra cautious, no doubt to that big knee in the first. Burgos looked crisper on the feet, and was connecting with greater consistency in the exchanges. Near the midpoint of the round Pepey again tried to shoot and wound up with Burgos on top; Burgos wanted none of Pepey’s ground game and stood back up. Pepey connected with a knee to the body when they were back up, but once again Burgos was the aggressor and landed more. Another shot stuffed resulted in Pepey trying to lay back in his guard and invite Burgos in, but the American once again thought better of it. Pepey then fell back on some showboating, egging Burgos on, beckoning for a firefight.  At the end of the round, Pepey pulled guard and this time Burgos stayed on him until the bell.

Pepey opened the third round swinging for the fences with overhand rights. While he landed some, he failed to have much impact on Burgos. Burgos for his part added some leg kicks, and mixed shows up to the head and body. Burgos was easily slipping Pepey’s attacks and played the counter-punch game at times. With two minutes to go, Pepey pushed the action against the fence, and seemd to be slowing. At the one minute mark, a big body shot dropped Pepey again, and once more, Burgos opted to let him back up. Pepey would shoot out of desperation and Burgos ended the fight landing hammer fists.

Heavyweight action came next as Tim Johnson took on Junior Albini. Johnson immediately pressed forward with a combo forcing Albini to retreat. Albini landed a leg kick, and the pair traded in an exchange before Albini went with a kick to the body. Johnson then pressed forward again and pushed Albini up against the cage. He could not, however, find the takedown or do much in the way of damage. The pair would later exchange with Johnson’s back to the cage, where Albini clipped Johnson with a left hook, dropping him! He’d follow up with a couple of hammer fists, but it was done.

Brian “Boom” Kelleher returned against Marlon Vera next. Kelleher took the center of the octagon early and pressed the action while Vera looked to counter. Kelleher mixed things up with some leg kicks. He then shot under a punch and scored the takedown. However, before long they were back up and Vera had Kelleher in a kimura. That didn’t work out, but Vera then latched on an arm bar as they went to the canvas, and got the tap!

The featured fight pass prelim saw Kyle Bochniak and Jeremy Kennedy square off in featherweight action. Kennedy opened the round scoring a big takedown and getting on top. Bochniak would work his way to the fence, but over half the round was spent with Kennedy on top. Nor could Bochniak escape; instead he found himself dragged out to the middle of the cage, with Kennedy finishing the way he started the round, in top control.

Round two didn’t stay standing long with Kennedy pulling Bochniak’s legs out from under him within thirty seconds. This time around, Kennedy was able to do more from the top, and Bochniak was a tad more successful, working his way back up mid-round only to be dragged down again. Kyle Bochniak would try to threaten with a guillotine, but to no avail. They would go to a third, and without question, Bochniak would need a finish if he wanted a win.

That old saying, the round always starts on the feet? Bochniak tried to take advantage of that, landing a number of strikes and hurting Kennedy, who was backed up against the fence, early. A low blow allowed Kennedy a chance to recover, however, and when the action restarted he went straight for the takedown. Bochniak outright ran from a takedown attempt, knowing his only hope of a win was on the feet. With just under two minutes to go, however, Kennedy finally got the fight back down. He’d land a big elbow that opened up his opponent late in the round, and the fight would go to the scorecards. 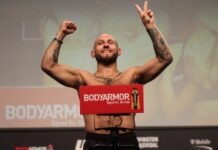 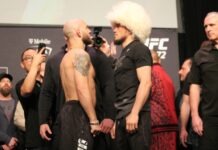