On Friday afternoon, the UFC will host its 25th Anniversary Press conference, which you can watch above. The promotion is expected to address the lightweight title picture, and make official the main event of interim champion Tony Ferguson against Khabib Nurmagomedov at UFC 223 this April.

Also on hand will be the main event players from UFC 222, Max Holloway and Frankie Edgar. The pair, originally scheduled to square off at UFC 218 in December, will now hit the octagon this March in Las Vegas.

The big news, however, will be the status of the lightweight title. Whether Ferguson vs. Nurmagomedov will in fact be for the undisputed belt — meaning UFC superstar Conor McGregor finds himself stripped of a championship for the second time — remains to be seen. And if he is stripped of the title, will he fight the winner of Ferguson and Nurmagomedov regardless, making the entire sequence of events a game of musical belts?

Check back at 5PM EST to catch the entire UFC 25th Anniversary press conference, ahead of UFC 220, taking place in Boston, MA at the TD Garden tomorrow. The UFC 220 card is headlined by a heavyweight title showdown between champion Stipe Miocic and the devastating Francis Ngannou. In the co-main event, Daniel Cormier defends his light heavyweight title against Volkan Oezdemir. 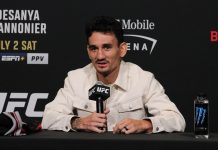