Jimmy Smith is the hottest free agent on the market at the moment, as the popular color man has parted ways with Bellator MMA.

During a sports broadcast, the commentary can make or break the whole experience. In mixed martial arts this is especially true. As of late the UFC has opened the commentary booth to both current and former fighters to test their chops at color. Some, like light heavyweight champion Daniel Cormier and former bantamweight champ Dominic Cruz have fared pretty well. Others? Not so much.

For just about twenty years now, the UFC’s Joe Rogan has been the gold standard in MMA color commentary. However, there is another guy who many argue is the best color man in the game: Jimmy Smith.

Cageside Press spoke with Smith regarding his departure from Bellator MMA, what’s next for him career-wise and more.

After eight years of being Bellator MMA’s go to guy for anything and everything, Smith decided to test the commentary free agent market so to speak. Still, “My time at Bellator was great” Smith said.

“They [Bellator] are a great organization to work for and I will always look back on my time there as special.”

Smith would go on to explain just how his free agency came about. “We actually informed them [Bellator] that I wouldn’t be back for 2018.”

“I had a two-year contract and an option year for 2018, about halfway through the year they [Bellator] said they wanted to make some changes to my contract, we went back and forth for a while but ultimately it just wasn’t right for me.”

On a personal note, anyone who knows me, knows that I have sung the praises of Bellator perhaps louder than any other journalist, but what were they thinking not honoring Smith’s option for 2018?

Smith would add some clarity, “If you have X amount of money to spend, then that’s what you have to spend. Some things may get left out but that’s how it goes.”

“I truly believe they [Bellator] made an honest effort to meet me half way, it just didn’t work out.”

With nary a negative comment to make about his former home, Smith is all class.

Now, the burning question on everyone’s mind is – Will the UFC sign Jimmy Smith?

So, will they? “The UFC was one of the promotions that reached out to us,” Smith assured me.

Reaching out isn’t quite the same as signing though, “We have been in contact with the UFC for some days now,” Smith elaborated. Time will tell if a deal gets worked out.

We’d be lying if we didn’t admit to salivating at the thought of a commentary booth with both Smith and Rogan. With both doing the same job, you could plug any old play by play guy in there with them (the UFC, after all, has frequently used a three-man booth).

Bellator not bringing Smith back may end up a blessing in disguise if he ends up in the respectable stable of UFC color commentators. Either way Smith wants to be clear that he is a fan of the sport before anything else, and he will continue to be involved with MMA in 2018 one way or another. 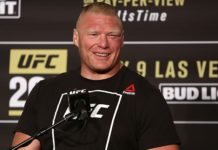 Sunday MMA Quick Hits: Lesnar Says He Should Have Been Paid More, Dana White Does Shoeyvasa 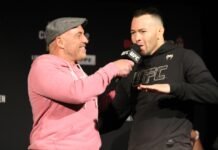