UFC St. Louis welterweight Zak Cummings is always the underdog, and that suits him just fine.

Zak Cummings returns to action this Sunday at UFC St. Louis, taking on the always dangerous Thiago Alves. Alves, a former title challenger well-known to UFC fans, is an opponent more befitting of Cummings’ talents. Fighting out of Kansas City, just down the road from St. Louis, Cummings has amassed a 6-2 record since arriving in the UFC following a stint on the stacked Ultimate Fighter 17. Yet the welterweight, who once headlined a Strikeforce: Challengers card against Tim Kennedy, has mostly flown under the radar thus far in his UFC career.

We spoke to Cummings about why people are sleeping on him, always being the underdog, almost appearing on The Ultimate Fighter 25 (which was set to be an All-Star season) and more in advance of his UFC Fight Night 124 tango with Alves.

First up, are people sleeping on Cummings? And why? The fighter suggested casual fans likely don’t know him, “but I think most of the people that are pretty diehard fans that know most athletes, they respect me. They know I’m dangerous.”

As for the why, well “I think more than anything its been the company itself. The UFC really hasn’t really got behind me or promoted me a ton. Which I get, I don’t have a massive social media following, I’m not your twenty-year old model-looking kid that can do back-flips and cool twisty stuff.”

Cummings recognizes the sport for what it is, however. “It’s an entertainment sport, it’s not just all about winning and losing” he told us. Still, the reality is that having a lower profile on the entertainment side has held him back. “I was able to get the co-main event [at UFC Fight Night 46], but it was a short-notice fight against Gunnar, that was Fight Pass only. The very next fight, I was the first fight of the night, when I fight in my home town, I’m the second fight of the night.”

As for who’s to blame, “I don’t blame anybody, I kind of take ownership of not… maybe I should do more stuff outside of fighting, maybe I should do more social media, build my brand a little bit more. But I haven’t been pushed as much through their [UFC’s] marketing, so the casual fans, they probably just don’t know about me as much.”

Isn’t it the promoter’s job to promote, though? Cummings responded that “it’s entertainment, I feel like it should be both.” As an example, “If you have someone who is like a Sage Northcutt, who is just a real likeable kid, who is a ridiculous athlete, is real happy-go-lucky, has a massive social media following – it’s entertainment. People want to see him fight, whether they want to see him win or lose. So why not book him. I was joking around about him, but I get it’s an entertainment deal, and he can relate to a lot of the fans, just being younger and all that stuff. But I don’t think I’m a boring fighter, by any means. If it’s an entertainment sport, I still think my fighting style is very entertaining. I finish fights.”

So, while “I should do more of my part, to build my brand and push that,” it’s also on the promotion, who Cummings feels “could get behind me a little more as well.” He continued, saying that “I don’t blame them by any means, I think it’s both party’s job. We’re independent contractors, I don’t work for the UFC technically. I have to do my job
I have to build my brand outside of the fights, between fights.” As for the UFC, “they need to make sure they’re promoting their athletes, and I just feel like they should promote the athletes that are winning their fights and hang around a little longer, [rather] than the guys that might have a little hype behind them, but they’re not going to back up the fights.”

The good news is, this time out, Cummings has a bigger name opponent, arguably one of the biggest of his career. Thiago Alves challenged UFC great Georges St. Pierre for the welterweight championship back at UFC 100, and has been on the radar for what seems like forever. Was the higher profile name something Cummings was gunning for?

“I think this is the fight I need to finally push me over the edge,” Cummings continued, “maybe get my name out there a little more with the casual fans.” One key? “They try to start the television portion [of the card] off with an exciting fight, that’s where they put us. I think it’s good, I get some T.V. exposure, against someone who’s been in the sport forever, who pretty much any fan knows. And I think it’s a good match-up for me.”

“I wanted someone in the top fifteen, but this is probably better. He’s right outside of it, and he’s a lot bigger name.”

This sport has evolved an insane amount in the last few years. I know for a fact that I’ve evolved

So how is he approaching the bout with the dangerous ‘Pitbull?’

“I know he’s dangerous, he’s a dangerous striker” said Cummings. “He’s got some nasty kicks, he’s really dangerous with his knees. He’s tough, he’s got a good chin. He always comes ready to fight, he can go a three-round war, he’s had five rounds before. He’s hard to take down, if you take him down he’s hard to hold down, he’s hard to finish.” That having been said, Cummings feels he has the overall advantage. “The main difference I see between us is, this sport has evolved an insane amount in the last few years. I know for a fact that I’ve evolved. My striking, my grappling, the wrestling, everything has evolved to become one piece. Not just kickboxing, not just Jiu-jitsu. Everything is one hundred percent mixed martial arts.” When it comes to Thiago Alves, “I don’t know if he’s done that. He’s a very good Muay Thai kickboxer, that’s one thing you can say about him, but I don’t know if he’s evolved with the sport, and I think that’s going to put me ahead of him.”

One page two, Zak discusses a potential fight with Darren Till, and signing up for The Ultimate Fighter 25, which was going to be All-Stars rather than Redemption. 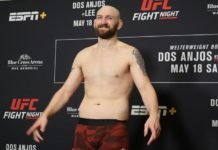 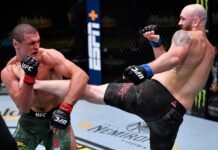 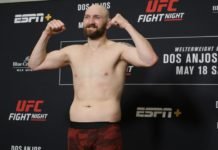