Jimmie Rivera went from fighting a former champ and all-time great, to a top bantamweight, to no one at UFC 219. And now, he’s off the UFC’s year-end card. Per a report Tuesday by MMA Fighting, Rivera has been told to stop cutting weight by UFC matchmaker Sean Shelby. It’s a significant blow to the event, as the bantamweight bout had a chance to tab a future title contender.

Rivera (21–1) is undefeated in the UFC, and has not lost since 2008. He was originally booked against former bantamweight champ Dominick Cruz, who many consider the best 135lb fighter of all time. When Cruz was injured, John Lineker stepped in to replace him. However, just days ago, Lineker was also forced off the card.

That left Rivera without a dance partner once again. It seemed as if Marlon Moraes might step in to face Rivera. However, though Rivera says he accepted the bout, at multiple weights up to 145lbs, Moraes eventually declined.

@JimmieRivera135 what’s up? Now it’s me and you. You can’t run anymore let’s do this @seanshelby @Mickmaynard2 @danawhite @ufc

Alright let’s do it, 145lb sign the contract. @MMARLONMORAES

Sorry to my fans, friends and family. @MMARLONMORAES said no to the 10 pounds. Those were his terms, I agreed, and then he withdrew the offer.

Let’s be clear on the situation. I’m in Vegas ready to fight. Missed Thanksgiving. Missed Christmas. Missed honeymoon. Was prepared. Was a professional. Cruz out. Lineker out. Marlon full of shit.

John Dodson had also campaigned for the fight, but it appears that bout isn’t to be either.

With Jimmie Rivera off the card, it’s likely one of the televised prelim fights will be bumped up to the main card to replace Rivera vs. Lineker.

The UFC has yet to make an official statement on the matter. 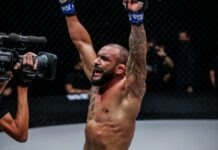