Mark Hunt’s UFC return is set, and as requested, the heavyweight is on the UFC 221 card.

The drama, for now, is over. After a drawn out feud with the UFC, heavyweight slugger Mark Hunt has been booked into a fight at UFC 221 with Curtis Blaydes. The bout was announced by the promotion on its official website Tuesday following an initial report by Australia’s The Daily Telegraph.

The fight brings a long, bizarre feud between the popular fighter and top promotion to an end, at least for now. The dispute kicked off after Hunt was quoted in a story attributed to him in Player’s Voice, saying among other things that he expected to die fighting, and was struggling with slurred speech and memory loss. The UFC immediately pulled him from his main event fight with Marcin Tybura in November at UFC Sydney. And rightfully so, given the legal risk of letting a fighter with such symptoms compete.

Hunt in turn blasted the UFC and Dana White in particular. In doing so, he claimed the decision to pull him from the fight was punitive, related to his ongoing lawsuit against the UFC regarding Brock Lesnar’s UFC 200 drug test failure. White would of course deny the accusation.

While it looked as if Hunt could be stuck in limbo, earlier this month, news emerged that the Kiwi heavyweight had passed the necessary tests to return to fighting. With UFC 221 set in Perth, right in Hunt’s backyard, the opportunity could not be passed up. The only downside is that Hunt failed to get a higher ranked opponent. He had been campaigning for a rematch with Fabricio Wedum, who holds a win over him from 2014. Werdum is ranked third in the heavyweight division under the official UFC rankings. Blaydes comes in at ninth.

Hunt (13–11–1 (1)) last fought in June against Derrick Lewis, finishing the American in the fourth round via TKO. That allowed him to bounce back from a KO loss to Alistair Overeem at UFC 209.

Curtis Blaydes, meanwhile, has had an impressive run in the UFC since dropping his debut to the fearsome Francis Ngannou. Blaydes (9-1) has won four straight, picking up wins over Cody East, Adam Milstead, and Daniel Omielańczuk. Most recently, he took a controversial stoppage win over Oleksiy Oliynyk at UFC 217 in New York. An illegal kick by Blaydes grazed Oliynyk, with the cageside physician subsequently stopping the bout. However, it was ruled the kick wasn’t the cause of the damage incurred by Oliynyk, and Blaydes was awarded the win.

Blaydes will come into the fight the much younger of the pair, over fifteen years Hunt’s junior. Power and experience, however, side with Mark Hunt. Anything can happen come the fight, of course, but this could be a case of too much, too soon for Blaydes.

The card takes place in Perth, Australia at the Perth Arena on February 11. Robert Whittaker meets Luke Rockhold with middleweight gold on the line in the UFC 221 main event. 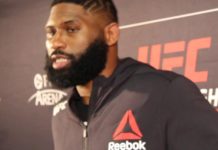