A fighter’s toughness is being questioned after his face was broken in training. A legend’s return is put on hold due to health issues. And a journalist showed that he knows absolutely nothing about MMA while covering UFC 218. Huh?

Despite some of the follies of human evolution (see: Implosion Fail), the development and growth of “huh” is something we should embrace. To be the change we want to see in the world, here are a few MMA stories last week that made us go “huh?”.

Ahead of UFC 218 in Detroit last weekend, Dana White took a shot at would-be featherweight title-challenger Frankie Edgar. The UFC President had plenty of time on his hands to throw stars under the bus, apparently. Huh?

Edgar was pulled from his scheduled bout with featherweight champion Max Holloway a few weeks prior to the event. Suffering a broken orbital in training, he was replaced by former 145-pound champ Jose Aldo. Changes like this are always tough on the promotion, but the switch didn’t harm excitement for the event; ticket sales were still on track to sell-out.

That didn’t stop White from going out of his way to question just how Edgar suffered such an injury in training.

“My question for Frankie – and I haven’t talked to Frankie yet, Frankie is in Russia or something right now, I think – but how do you break your orbital in training?” White said. “Unless it was a freak knee to the eye in wrestling or something like that.” – via MMA Junkie

White, and others, should know something fairly simple about fighting and training: stuff happens. This isn’t the first weird injury to happen to a major fighter prior to a major bout. Nor will it be the last. It’s impossible to always control all of the variables, especially when it comes to fighting.

The weirder part is figuring out what White thinks the promotion has to gain from questioning such an injury. Much less when it concerns a fighter like Frankie Edgar. The former UFC lightweight champion is as tough as they come, and has been chasing a second title at 145-pounds for years. He wouldn’t be pulled from the fight if it weren’t serious, and a broken orbital is just that.

Why that’s so hard for White to understand is odd. But, it probably shouldn’t be.

A few weeks after becoming middleweight champion at UFC 217, Georges St. Pierre revealed he has been diagnosed with ulcerative colitis. Huh.

Taking to Facebook last week, GSP said he’d been dealing with the chronic disease which causes inflammation in the digestive tract. Ulcerative colitis is relatively common, with hundreds of thousands of cases in the United States each year.

This is a bummer. St. Pierre was impressive in his return after nearly four years away from the Octagon. He’s an all-time great, and MMA is better when GSP is around. What this means for his plans in 2018 remains to be seen, but we (and the UFC) are hoping for a quick return from the two-division champion.

Journalist goes to UFC 218, has no idea what he’s looking at

UFC 218 was one of the best MMA events of the year. But, you wouldn’t know that by reading the recap from the Detroit Free Press. Huh?

This article doesn’t deserve the amount of attention it has already received by MMA fans, so we’ll keep this quick. A reporter who has no background covering the sport was sent to the event by his employer, and returned with an incredibly off-base summation of the night’s happenings.

Comparing the event to UFC 217 at Madison Square Garden, the reporter failed to have a proper framing of UFC 218 from the start. Citing a lack of celebrities in the crowd (like Kid Rock and Eminem), fights stalling when they went to the ground, and a lack of mainstream stars on the card, the reporter showcased his hilariously horrible grasp on modern-day MMA throughout the piece.

The real gem though, comes near the end.

“This fight, and maybe the UFC, needs more stars… Truthfully, the UFC needs Conor McGregor. Or a Rhonda Rousey. Or another star everyone wants to see — especially a star other stars want to see.” – via Detroit Free Press

No, that egregious spelling mistake isn’t ours. That’s what’s in the actual article (twice). There are numerous grammatical errors throughout as well, but that’s the least of the article’s problems.

Yeah, the promotion could use another Conor McGregor or two (duh), but that had no impact on the quality of UFC 218. If you’re going to claim an event is boring, and the promotion putting on the event needs more stars, some research or evidence would be a good way to back-up those claims.

Instead, the Detroit Free Press looks bad. It’s paying an alleged journalist to do a job he clearly can’t handle. The worlds of MMA and journalism are facing their own struggles right now, and we don’t need pieces like this making them look worse.

Dana White questioned the training of one of the UFC’s all-time greats in Frankie Edgar for no reason, while another legend in Georges St. Pierre revealed he may not be back for a while due to health issues. Neither of those things ruined UFC 218, one of the best events of the year, despite what you may read in the Detroit Free Press. 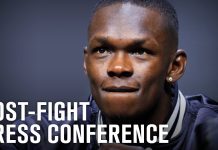