A welterweight scrap ended in controversial fashion at UFC 218 has been immediately rebooked for the promotion’s year-end show.

Sometimes, you get a chance to set things right. That’s what happened Saturday at UFC 218. Immediately following the event, which took place at Detroit’s Little Caesars Arena, UFC President Dana White announced that one of the evening’s preliminary card bouts had been rebooked. That, of course, was the welterweight bout between Sabah Homasi and Abdul Razak Alhassan.

Homasi vs. Alhassan started out as an entertaining enough affair, the second fight in on the UFC Fight Pass prelims. Homasi was the aggressor early, but both men managed to hurt the other. When Homasi initiated a Thai clinch and rocked Alhassan with knees to the body, the fight seemed to be going in his favor. However, a glancing blow from the Ghanaian fighter later dropped Homasi. He immediately latched on to a leg, but ref Herb Dean inexplicably called the fight off.

Dean, who did not appear to have a clear line of sight to see exactly what was conspiring when he waved the fight off, was looking to prevent any damage to the downed fighter. Homasi, however, was quite clearly intelligently defending himself, and immediately protested the stoppage. Given Dean’s normally above average performance as a ref, it was a shockingly bad call, but with no other option, Alhassan was awarded the first round TKO victory.

While Homasi could likely appeal the outcome, an immediate rematch leaves a better taste. Homasi vs. Alhassan looked like it was going to be a great fight, so why not do it over?

When asked about the fight being rebooked, White confirmed it would appear at UFC 219, saying “It’s official.”

UFC 219 takes place on December 30 at the T-Mobile Arena in Las Vegas, NV. 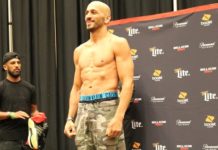 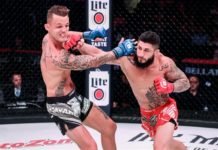 Bellator 232: Sabah Homasi Gets Step Up Against Paul Daley in Co-Main Event 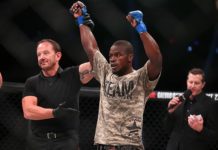