The Black Beast is set to return at UFC Fight Night 126, against Poland’s Marcin Tybura.

Derrick Lewis has another big fight on his hands. And for the first time since 2015, he won’t have to travel very far to get there. That’s because the UFC is targeting a bout between Lewis and fellow top heavyweight Marcin Tybura for UFC Austin. MMA Junkie was first to report the news, which has yet to be officially announced.

Lewis, who resides in Texas, will return to action for the first time since June, when he lost to Mark Hunt in the main event of UFC Fight Night 110. He had been scheduled to face Fabricio Werdum at UFC 216 in October, but was forced off the card due to injury. The loss to Hunt snapped a six fight win streak for Lewis (18–5 (1)), a feat rarely seen in the heavyweight ranks.

‘The Black Beast’ has not fought in Texas since UFC 192 in Houston.

Tybura (16–3), meanwhile, suffered a defeat earlier this month at UFC Sydney, against Werdum, the man Lewis was to fact last month. That put a halt to his own three fight win streak.

While there is no indication of where this fight will fall on the card, it could easily serve as the night’s main event. Tybura just headlined a UFC event for the first time in Sydney, while Lewis has of late been at the top of several cards. 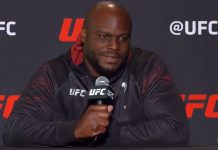