ONE Championship returned to action on Friday in Manila, the Philippines, with a card headlined by two title fights, one of which crowned the Asian promotion’s first dual-weight class champion.

ONE Championship: Legends of the World was a big milestone for the MMA powerhouse of Asia, as Marin Nguyen moved up in weight to capture lightweight gold against Eduard Folayang. With his second round knockout of ‘Landslide’ Nguyen captured his second title in the promotion, and now holds both featherweight and lightweight gold.

It’s a feat rarely seen in MMA, and even less often in major promotions. To date, Conor McGregor is the only person to achieve the feat in the UFC. Bellator MMA has yet to produce a simultaneous two-weight class champion, though light heavyweight champ Ryan Bader will have a shot next year.

Aside from Nguyen’s historic night, Legends of the World also saw flyweight champion Adriano Moraes successfully defend his title against challenger Danny Kingad. Securing a rear-naked choke late in the first round, Moraes sealed the deal and improved to 17-2 in the process.

The night’s action saw all but a single bout end in a finish, with Chinese strawweight Peng Xue Wen picking up a knockout via slam (suplex).

You can check out the night’s action in the gallery below, courtesy of ONE Championship! 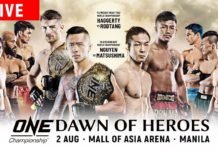