There are incredibly talented welterweight champions in MMA promotions around the world. Three stand out, along with several contenders, and for us to find out which 170-pound fighter is currently the best, we need this tournament.

There isn’t another division in MMA that features champions like the 170-pound weight class. From UFC to Bellator MMA and ONE Championship, belt-holders and contenders alike showcase welterweight’s depth of talent on a regular basis. While this is great for fans and fighters, it’s hard to know who the “real” champ is.

Whether or not that matters is for another column. For the sake of this piece, it’s the main goal: find out who’s the best welterweight MMA fighter in the world right now.

Of course, we won’t be able to reach that goal over the course of a column. And we’ll likely never know the answer anyway, if there even is one. There’s nothing like the fight game, where who’s best can change in an instant. But matchmaking is always fun, especially with a talent pool as deep as the group at 170-pounds.

Here’s an eight-man tournament, and how we got there, featuring welterweight champions from a few major promotions, and some additional contenders from those promotions as well. If somehow this were able to happen, it’d be the closest we could get to deciding the best welterweight MMA fighter in the world today. It’s a fantasy, but a fun one to explore.

Let’s start with the easiest invites: the champions. That means ONE Championship’s Ben Askren, Bellator’s Douglas Lima, and UFC’s Tyron Woodley are all included and given their own corner of the bracket. After that, things can get kind of tricky.

Askren is the only contender worthy of the tournament from ONE Championship, but a few guys from Bellator could make an argument to join the fun.

The decision is between Lorenz Larkin, Paul Daley, and Rory MacDonald, with MacDonald having by-far the best resume’ of the bunch. Larkin’s recent struggles, and Daley’s relatively recent losses to both Lima and MacDonald, make them a tough fit. We’re gonna go with MacDonald, and leave Larkin and Daley at home.

That gives us four fighters, with four more slots for current UFC contenders.

The problem with the UFC’s welterweight division in 2017, is that we’ve seen a lot of the matchups already. Tyron Woodley’s recent run of victories has given us several top-tier matchups, and decisive decisions to reference. But that doesn’t necessarily preclude certain fighters from the tournament.

Part of the goal of this Tournament of Dreams would not only be to decide who is the best, but to also get some fun matchups we otherwise may not see. Bringing in talents from various promotions just to watch bouts we’d already seen doesn’t make a lot of sense. So, when you read the rest of this, try to not freak out about the inclusion of Conor McGregor and Nate Diaz.

Let’s get to the others first, and give you some time to cool down before firing off that comment that proves you didn’t read the piece.

Doing a welterweight tournament without Georges St. Pierre, even in 2017 with his sights on the UFC middleweight title, would be bad. GSP is invited, because without him, the tournament wouldn’t have the credibility or historical significance it needs. That leaves one more spot, and several worthy UFC fighters.

Stephen Thompson has a solid argument, which looked a lot better at this time last year. With a draw and a loss to Woodley, including one of the worst fights in recent memory, Thompson’s stock is relatively low. Jorge Masvidal wouldn’t be a bad addition either, considering he’s 3-1 in his last four bouts. But, he’s in a similar spot to Thompson, needing a marquee win following a less-than-thrilling loss.

Luckily, Thompson and Masvidal will be fighting each other at UFC 217, and the winner will find themselves back in the UFC welterweight title picture. As great as that fight will be and as these fighters are, they aren’t invited. The same goes for Demian Maia, which pains this writer in particular.

Maia’s welterweight run since May of 2014 is nothing short of phenomenal. Thankfully, he eventually got the title-shot, despite how it went. While he’s probably the best jiu-jitsu practitioner in MMA today, his split-decision win over Masvidal and decisive loss to Woodley are enough to keep him out of this tournament.

That leaves Robbie Lawler. Yeah, he’s lost to Woodley, just like Thompson and Maia. And yeah, his most impressive win of late is over Donald Cerrone, just like Masvidal. But Lawler has some things that those guys don’t. Namely: UFC welterweight title-defenses. He would provide an incredibly exciting matchup for the majority of the rest of the tournament invitees, and we’re not sure who would turn down the possibility of Lawler-MacDonald 3.

Lawler’s history in the division, and the lack of a clear-cut final addition, makes him the best choice for the final slot. As for Thompson, Masvidal, and Maia, tournaments like this generally need alternate bouts for a variety of reasons. Toss-in Bellator’s Paul Daley, and we have a couple of matchups that would make great alternate bouts in the case of an injury or other issue causing a fighter to pull-out.

Why Conor and Nate, again?

Alright, they aren’t exactly welterweights. And it’s not as though welterweight is lacking talented fighters. But, for the same reason Lawler eeks out that bunch, this tournament needs Conor McGregor and Nate Diaz.

He’s made his intentions for welterweight clear, with fights mentioned at various points against current UFC champion Woodley and former UFC champion St. Pierre. Even MacDonald has mentioned wanting to fight McGregor.

The Irishman isn’t made for a lengthy stay at 170-pounds, but there is little doubt he would challenge the group assembled. Although he doesn’t have a ton of experience at welterweight, he has some, and loves somehow making himself the underdog. His fights are never boring, and are considered must-watch for the vast majority of combat sports fans. If we’re trying to sell tickets or get viewers, not at least inviting McGregor would be foolish.

He’d likely be interested, too. Fresh matchups with guys he’s already called-out, and the opportunity to call himself the best welterweight on the planet, sound like a great way to get McGregor involved. The risk would be minimal as well, as he wouldn’t be expected to win the tournament, and wouldn’t have to (finally) defend a freaking title, either.

Really, the argument is simple. The last man to defeat McGregor in the Octagon is Nate Diaz, and he’s the only man to do it since 2010. Oh, and it was at welterweight. Going along with the same reasoning for being okay with Lawler-MacDonald 3, rather than Woodley-Thompson 3, nobody would be mad about a third bout between the duo at 170-pounds.

To make the duo easier to include, we’ll just make McGregor-Diaz 3 a first-round “wild card” bout. Whoever advances will face an extremely difficult matchup, and surely put on a show as they’ve each done fight after fight. Exciting fighters like McGregor and Diaz are a must. The tournament is about finding the best welterweight fighter in all of MMA, but that’s not fun if the fights and matchups are boring.

The current group of champions is great and deserving of their standing. But recent bouts featuring guys like Woodley and Askren, and past performances from GSP, showcase the need for entertaining fighters like McGregor, Diaz, and Lawler.

Given the top-seeds for the champions from various promotions, and the “wild card” bout between McGregor and Diaz, most of the bracket is already created. We just have to find slots for St. Pierre, MacDonald, Lawler.

As of this writing, both Lawler and MacDonald are the number-one contenders for the welterweight title in their respective promotions. St. Pierre’s record is incredible, but considering his time away from the Octagon, we’re going to put him as the #8 seed.

For the sake of being different than reality, we’ll avoid a first-round matchup between Lima and MacDonald, since that title bout is headed our way in January. Plus, Lawler’s defeated MacDonald twice, so his higher-seeding makes sense, as does Askren and his 2012 victory over Lima. That means Lima will get Lawler, and Askren will get tasked with MacDonald.

This tournament may not be perfect, but it looks like a lot of fun. Our money is on Tyron Woodley, but an argument could be made for any of the fighters included. We’re getting a slightly different version of this tournament in reality, with Lima-MacDonald and Thompson-Masvidal already scheduled in their respective promotions, and wouldn’t be surprised to see McGregor-Diaz 3 and/or Woodley-St. Pierre join the list in 2018.

Let us know what you think of The Welterweight World Tournament, what your bracket would look like, and which fighter you think would become The Best Welterweight in MMA! 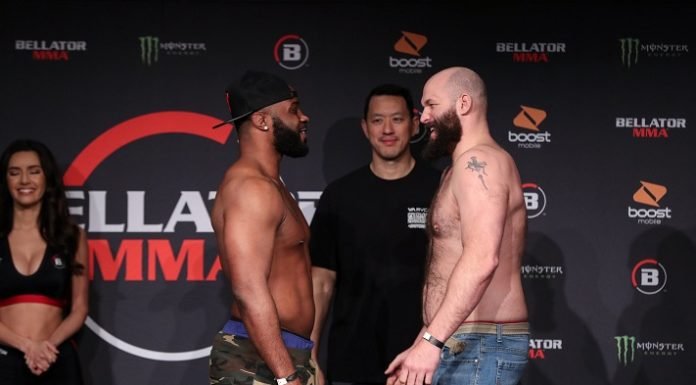