There’s been a shake-up to Rizin’s upcoming Autumn 2017 card at the Marine Messe Arena in Fukuoka, Japan next month. The legendary Dan Henderson had been expected to meet Kazushi Sakuraba in a grappling match at the event. However, due to a neck injury, “Hendo” has been forced off the card. Replacing him will be another legend — Frank Shamrock.

RIZIN announced the switch in a press conference held Friday. RIZIN FF chief Nobuyuki Sakakibara said of the change that “it’s very unfortunate about Dan Henderson, but I’m very excited to have Frank Shamrock come to Japan and step in our ring.”

You can catch the press conference below.

Sakuraba (26–17–1 (2)), who was recently inducted into the UFC Hall of Fame, returned to MMA in December 2015 under the RIZIN banner, losing to Shinya Aoki. Since then, he has stuck to grappling matches, fighting to a draw alongside Hideo Tokoro against Wanderlei Silva and Kiyoshi Tamura last year. The match against Shamrock will be his second grappling match in RIZIN; he also fought to a draw against Renzo Gracie at Metamoris V in 2014.

Shamrock (23–10–2) has not fought in MMA since a loss to Nick Diaz in 2009. At one time, Sakuraba vs. Shamrock was a dream fight for MMA fans, but one that never materialized. Shamrock also happens to hold a win over the man he is replacing, Dan Henderson, in submission grappling bout at The Contenders in 1997.

Jerome LeBanner was also announced as appearing at the event in his first MMA fight since 2010. He’ll take on DEEP champion Roque Martinez in the only heavyweight bout on the card. 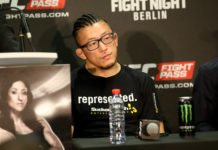 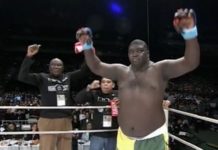 UFC Vegas 11’s Cowboy Cerrone: No Thought of Retirement, “This One’s For Me”