ONE Championship returned Friday with Quest for Greatness, live from Kuala Lumpur, Malaysia. The card was headlined by a featherweight title fight between Marat Gafurov, defending his title against Australia’s Martin Nguyen. Also on the card, former welterweight champ Nobutatsu Suzuki, now plying his trade at lightweight.

How did the evening’s action play out? Check back throughout the event for a live recap and results!

The Quest for Greatness card was opened by a strawweight battle between Robin Catalan and Dejdamrong Sor Amnuaysirichoke. Catalan got the crowd roaring when he scooped up Dejdamrong and slammed him hard to the canvas. That, however, led to something of a double crucifix with both fighter tied up with the other. The sequence seemed to loosen up the fighters, who became more active; Catalan would score a takedown with just under a minute to go in the first round, then shake off a heel hook attack moments later.

Round two saw Dejdamrong opened the round with a thai clinch, where he landed knee after knee on a stunned Catalan. Before long, Catalan was down and the ref had waved off the fight!

Ann Osman vs. May Ooi

Women’s strawweight action was up next, and it didn’t take long for Ann Osman to drop May Ooi with a big right hand that allowed Singapore’s Osman to swarm and land a ton of follow-up punches. Ooi would recover, however, making it back up and tying up the action while she recovered. With just over half the round to go, a fully recovered Ooi landed a takedown and wound up in side control. While she couldn’t find the finish there, not long after she managed to take the back of Osman, flatten her out and sink in the rear-naked choke, earning the tap for the upset win!

In flyweight action, Gianna Subba and Riku Shibuya squared off next on the Quest for Greatness card. Subba was able to get the fight to the mat quickly, with the crowd firmly in the corner of the Malaysian native. Shibuya managed to work his way back to his feet, but they wouldn’t stay standing for long. This time, Shibuya would work for a single leg takedown, backing Subba up against the fence as the later employed a whizzer in defense. Shibuya would tie up the legs of his opponent, stopping Subba from escaping the position, but the Japanese fighter was unable to do any damage. With just under a minute, Subba managed to get back up and the pair would scramble and jostle for position along the fence. Subba would close the round with a spinning elbow.

Round two saw more grappling between the pair, with Subba finding himself in top control at the midway point. However, back on the feet a low blow by Shibuya halted the action as Subba needed some time to recover. When action resumed Shibuya went high with a number of kicks then dropped for a single leg, pressing Subba up against the cage wall. Subba once again popped back up, then landed a takedown of his own with an outside trip alongside the fence. That gave Subba top control with a minute to go, but it wouldn’t last. Instead, a scramble by Shibuya allowed Subba to land a perfectly timed knee to the head of his opponent, which in turn led to a couple of submission attempts to close out the round. The Japanese fighter would survive, but was no doubt stunned.

No glove touch to open the third round, as things were heating up. Riku Shibuya shot early for the single leg and latched on to the limb, trying in earnest to complete the takedown. He’d then switch to a double and hold Subba down against the fence. Once again, Shibuya was unable to make much happen other than control his opponent for a time. Moments later a reversal would see Subba land on top; they’d then work back to the feet where Subba got the better of the exchanges. Shibuya would fire off a 1-2 then drop down for another single leg, in a repeat of his earlier attempts. The pair would finish the round with Shibuya pressed a downed Subba against the fence, but Subba was actually able to do more damage while sitting, landing a number of body shots. It would go to the scorecards, with Subba awarded the unanimous decision win.

McLaren did a little showboating early, and the MMA Gods frowned upon it as he was dropped shortly after with a counter right and ate a huge amount of ground and pound. McLaren could not weather the storm as he was forced to cover up, and the ref soon came to his rescue. Wow!

In welterweight action, Agilan Thani and Sherif Mohamed started fast and furious, with Thani securing a takedown after an early exchange. Back up, then back down again they went with Mohamed reversing and winding up on top. Back to the feet they went next, and it seemed impossible that the pair would be able to keep up such a frantic pace. Thani would find himself in top position next, but Mohamed was able to defend admirably, bucking him off in the end. Thani allowed his opponent back up, opting to restart on the feet, but it wasn’t long before they were back down with Mohamed holding on to a body lock as Thani worked to complete a takedown. Thani would pull free and look to land some ground and pound while avoiding upkicks.

A low blow early in the second round held up the action as Sherif Mohamed needed time to recover. Once action resumed, Thani found himself on top, then took the back briefly, looking to flatten Mohamed out. Mohamed recovered, but Thani was in full mount. With three minutes left in the round, he had plenty of time to work. Mohammed would survive a combination of ground and pound and submission attempts, alternating between covering up and clinging on to his opponent. That allowed him to escape the round, the the second belong to Thani.

Round three saw a jumping knee by Thani followed up with a huge slam that planted Mohamed on his back. Once again, Thani was in full mount, this time with nearly four minutes to go. He’d briefly move to side control, then knee-on-belly, while looking to land hammer fists. Thani would stay more active this time, moving between a number of positions but maintaining control throughout. In North-South he landed a big knee to the head of his foe, followed by another knee while in side control. Ultimately, the final two rounds belonged to Agilan Thani.

A number of kicks and exchanges on the feet opened the co-main event of ONE Championship: Quest for Greatness. Ting would attempt a cartwheel kick just over a minute into the first round. Suzuki would take a more traditional approach; Ting, meanwhile, would look to land a heavy right. He’d then mix things up, looking for a takedown at the midway point of the round. He’d finish with a slam that landed him in half guard. From there it wasn’t long before the ground and pound was unleashed, and Suzuki was simply unable to defend! Ev

The second bout between Gafurov and Nguyen saw featherweight champ Gafurov land a big left early. Moments later, Nguyen was down and eating shots, then gave up his back. Gafurov had a body lock sunk in, and was looking for the rear-naked choke, but Nguyen was able to escape. On the feet, Nguyen mixed up leg kicks, jabs and overhand rights while the champ answered with kicks and a jab while looking to get the fight down. With just over ninety seconds to go, Gafurov changed levels and secured the takedown. He found himself in half guard, and controlled from that position until Nguyen finally made it back up, before briefly being taken down again at the end of the frame. While Nguyen may have gained confidence by avoiding the choke by the champ, it was still Gafurov’s round.

Round two saw Gafurov latch on to Nguyen early, using a knee to set up an attempt to take the back while Nguyen was still standing. Nguyen fended him off however, and Nguyen landed a massive overhand right that dropped Gafurov like a sack of potatoes! With Gafurov face planted the ref was quick to wave off the bout before too many follow-up shots landed. Martin Nguyen wins the ONE Championship featherweight title!

Post-fight, Nguyen dedicated the victory to his late father.

ONE Championship: Quest for Greatness Results: 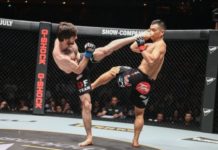 ONE Championship: Quest for Greatness Announced for Kuala Lumpur in August