The featured UFC Fight Pass Preliminary bout of UFC 214 Saturday in Anaheim witnessed the return of Russian Alexandra Albu, who was back in the octagon for the first time since her 2015 submission of Izabela Badurek. That fight happened to be her UFC debut, and it was an awful lot of time between bouts for “Stitch.”

Opposite Albu in the cage on Saturday was Kailan Curran, just 1-4 in her UFC career. Curran was desperately in need of a win at UFC 214, entering the event 4-4 as a pro.

Albu pressed the action early, caught a kick, and landed a heavy right hand on Curran before initiating the clinch. Albu managed to land several knees, while Curran got off a left hand. Breaking, Albu began lighting Curran up but pulled guard when Curran pressed the action. She then moved for a leg lock but gave up her back, eating several strikes in the process. She managed to defend and make it back to her feet, where she connected several more times before muscling Curran to the ground landing more strikes from above. Once back up Curran clinched and looked for a trip while peppering Albu with shots to the head and knees. Albu’s nose was busted up, but she was still game and took Curran down with a judo toss, landing an elbow and more strikes before they popped back up again.

The second round saw Curran as the aggressor early. The bout was becoming a dog fight, with Albu leaving her chin exposed, but continually being able to take Curran down with throws when necessary. An illegal upkick by Curran briefly paused the action, but Albu was able to continue. It almost felt as if Albu was her own worst enemy in the fight, going at such a frantic pace and throwing everything in her punches that she opened herself up to damage.

Round three saw Albu chopping at the legs of Curran, but looking noticeably tired. Albu connected with a solid right early but Curran was able to take it and answer back. Trying to throw Curran down again, Albu, looking tired, gave up her back, and after escaping found Curran in side mount. Curran then switched to half guard, with Albu struggling beneath her. Albu worked for a choke from the bottom, but Curran was spending a lot of time on top. Curran feigned letting Albu up, and landed a punch to the head as Albu tried to get back to her feet. Curran again took top control inside Albu’s guard. Both women looked exhausted and Curran was landing a number of hammer fists and hard shots. With thirty seconds to go Albu got back up and took Curran down, landing some ground strikes of her own; seconds later they were up again only for Curran to wind up on top as the bell rang. Great bout! 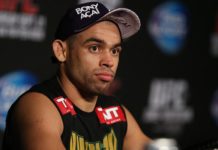 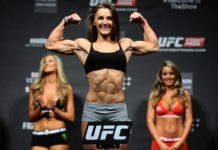