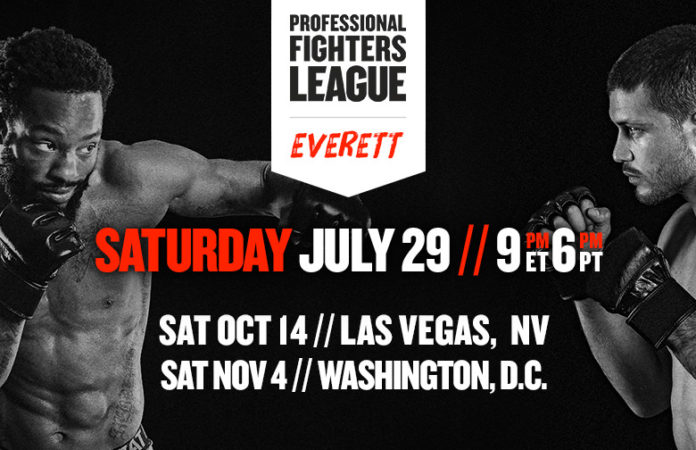 The Professional Fighters league hosted its sophomore event on Saturday, with PFL: Everett featuring a main event between undefeated featherweight Andre Harrison taking on a hot Steven Rodriguez. The promotion, born out of the ashes of the World Series of Fighting, had key spots in its 2018 season on the line.

The action was scheduled to go down live from the Xfinity Arena in Everett, with the main card airing on NBCSN starting at 9PM ET.

All fighters made weight Friday.

Check back come fight time for full results and a main card recap!

Earlier on in the evening, to the surprise of no one, Rosholt used his strong wrestling base to smother opponent Nick Rossborough throughout all three rounds. Ultimately, the judges awarded him a rare trio of 30-25 scores.

In the featured prelim fight, heavyweight Josh Copeland went toe-to-toe with longtime MMA vet Mike Kyle, bringing the fight to his opponent. Copeland used some slick fakes in the first, teasing with a lead right only to unleash a big left. In the second, a low blow felled Kyle and paused the action for a time. Back underway, the pair continued to exchange, with little thought of this bout going to the ground from either men. By the third, Copeland and Kyle were looking tired but still swinging gamely. Ultimately it went to the scorecards, with Copeland hanging on to take the unanimous decision.

Opening the main card of Professional Fighters League: Everett on NBCSN were middleweights Rex Harris and Bruno Santos. Santos controlled the decagon early, unloading with a leg kick, only to have Harris begin pressing looking for his range. The first round was competitive but reserved as the two fighters felt each other out; the second saw the action pick up a little with Santos and Harris both landing combinations. Santos also took advantage of a charging Harris to score a takedown. Back on the feet, a clinch along the cage would allow the duo to recover; ultimately they’d grapple til the bell sounded, taking them to the third.

The third started with Harris pressing forward, looking to land a combo. Santos would clinch only to have Harris break and re-engage. The pair pressed back and forth throughout the round, with both connecting but not able to land clean. With a minute to go they met in the center of the cage where Santos was able to score a double leg takedown. From there he landed shots from above as he looked to take the back. He’d land a few more shots as the round came to a close.

The takedowns made the difference, as Santos took home the unanimous decision.

Former UFC title challenger and Strikeforce welterweight champ Jake Shields was up next, taking on Danny Davis Jr. Shields had Davis scrambling on his knees and had taken the back within the first minute of the fight. He’d transition to mount easily, add in some elbows, then again take the back, looking for the rear-naked choke. Davis would survive, but before long Shields was back in a high mount raining down punches. He’d later attempt another rear-naked choke after scoring a ton of ground and pound as Davis covered up; might have been a chance for the ref to call it as Davis wasn’t defending much, but in the end he survived the round.

Shields shot in immediately in the second eventually securing a single-leg and taking the fight to the ground. He soon had the back of Davis, and with the body lock secured stayed there for much of the round. Shields dominated throughout the round, but again Davis survived.

Round three saw Jake Shields playing the role of backpack once again, with both hooks in and looking for the rear-naked choke. Again it would elude him, but he’d move to mount, score more from the top, landing at will as Davis covered up. In the end it would go the distance for a lopsided decision.

It was Lobato who would press the action early, with Okami backing up and looking to counter. However, the Japanese fighter took the fight to the ground early, and worked from within Lobato’s guard. Lobato would roll out while looking for a leg, only to be taken right back down to the mat. Lobato proved able to regain his feet again, but Okami was controlling the fight, pushing the action up against the fence and soon scoring a  trip to take things back down. Lobato would pull guard for a guillotine attempt, but was unsuccessful, with the first round clearly in Okami’s favor.

The second round was more of the same, with Okami firmly in control, frequently taking the fight to the mat and securing the back of Lobato. Okami would look for a finish, but Lobato deftly fought him off, keeping himself in the fight but rarely getting off any offense of his own. With ninety seconds left in the round the ref would stand the action up, giving Lobato a chance to get back in it, but he was quickly taken down by Okami again.

In the third, Lobato would manage to work for a leg lock early in the round, but once again, the frame belonged to Okami, who worked from Lobato’s butterfly guard, posturing up to land ground strikes. In the end it was all Okami, who scored eleven unanswered takedowns in the bout.

Harrison settled into a countering role early while Rodriguez pressed forward. Rodriguez landed a leg kick that caused Harrison to stumble a moment. Later, Harrison would begin attacking with leg kicks of his own. Rodriguez stayed light on his feet and mixed up his strikes, but approaching the final minute Harrison was able to connect more frequently. With half a minute remaining Harrison would secure a takedown, but did not have enough time to make anything of it.

In round two, the pair traded early, with Rodriguez circling out of harm’s way. Harrison again found himself on top with three minutes left in the round, with Rodriguez stacked against the cage. Harrison was able to pull his opponent’s legs out from under him, trapping Rodriguez. Back on the feet, Harrison pressed forward in the final minute, landing a number of strikes and adding a takedown to put an exclamation point on things. They’d make it back up for the final few seconds with Rodriguez scoring a takedown of his own to end the frame.

Round three opened with Harrison playing the counter game. Rodriguez went high with a kick that was blocked. Rodriguez continued to look strong on the feet, but still struggled with the takedown, as Harrison scored another at the halfway point. Harrison would move into side control, and maintain position for a good part of the round.

The fourth round saw Rodriguez press Harrison up against the fence early, but after being unable to make much progress, the ref restarted the action. That led to Harrison taking things down again, but the game Rodriguez managed to work back to his feet. It look like this one would go to the fifth and final round as the two squared off but couldn’t find a finish in the final seconds of the frame.

Round five was very much more of the same, and if there was a theme to the bout, it was Harrison being able to control once he got the fight to the ground. He would add some knees from the clinch towards the end of the round, and Rodriguez stayed game right until the final bell. When all was said and done, Harrison took home the unanimous decision.