UFC 213 took place Saturday night live from the T-Mobile Arena in Las Vegas, Nevada. Due to a last minute shake-up resulting from an illness to women’s bantamweight champion Amanda Nunes, the middleweight interim title fight between Robert Whittaker and Yoel Romero was promoted to the main event of the evening. Earlier on in the evening, however, a pair of bouts were aired on UFC Fight Pass, featuring light heavyweight and featherweight action.

In the light heavyweight division, undefeated Trevin Giles (9-0), an LFA/LFC vet, was set to face James Bochnovic (8-1). Both men were making their UFC debuts, with the fight very much being about adding depth to the struggling 205lb weight class in the UFC.

In the featured UFC Fight Pass Prelim fight, another pair of UFC debutantes would go to war in the featherweight division as Cody Stamann (13-1) faced Terrion Ware (17-5). Ware had previously appeared in BAMMA and RFA, while Stamann was the winner of seven straight, mostly under the Knockout Promotions banner.

Would one of these debuting fighters have a star turn Saturday night?

Bochnovic got the first rise out of the crowd by landed a hard body kick; he would utilize a number of kicks early in the fight. Giles would answer by pressing him against the cage and scoring a takedown ninety seconds into the round that forced Bochnovic to work from guard. He would work for an arm bar from the bottom, but with no success, and Giles was able to maintain top control and turn the affair into a grind. As Bochnovic tried to escape late in the round, Giles would suplex him back to the canvas and drop some heavy punches from above, scoring the best shots of the round.

In the second, Bochnovic found himself in trouble early, eating a big body shot and once again finding himself dragged to the ground. By the two minute mark, Bochnovic was flattened out and eating punches from Giles, who had his back. While the ref encouraged Bochnovic to fight back, he simply could not, and was knocked out with a few more shots from the top.

Ware started out as the aggressor, dictating the pace initially but Stamann soon initiated a clinch. He would flash level changes, but both fighters were looking to find their timing. Stamann scored a strong takedown ninety seconds in, and kept the pressure on but Ware was able to jump back to his feet relatively quickly. After a brief time out due to a low blow by Ware, action restarted, and Stamann began finding a home for his left hook. He would land another takedown shortly after, and go to work in Ware’s guard. We’d go on to the second.

In round two, Ware looked light on his feet, but ate a knee from Stamann early. Ware then connected with his opponent, which led to some trash talk and another big takedown from Stamann. Back on the feet, both men landed some solid shots across a number of exchanges. Stamann connected with a good right to the side of the head with just over two minutes to go in the round. Ware would land a decent right of his own moments later. However, the takedown again became the story as Stamann landed yet another explosive double leg. After making it back up and Ware turning on the heat, Stamann would take his foe down yet again, and make it the second round in a row where Ware finished on his back.

In round three, it seemed like Ware would need a finish for the win, but stranger things have happened in MMA. Ware was wary (pun fully intended) of the takedown, with his corner on the lookout for the shoot as well. Ultimately, however, it was futile, as Stamann once again took Ware down halfway through the round. Stamann was able to land some ground n’ pound from the top, doing more damage this time out. He’d end the round blitzing Ware, and it went to the cards. No question on this one. 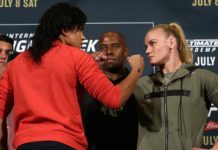 Amanda Nunes vs. Valentina Shevchenko 2 Moved to UFC 215 Per Report 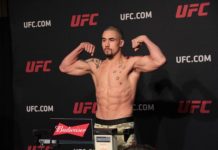