We’re back this week with another installment of Looking Ahead, and this time, we’ll preview the finale of this season of The Ultimate Fighter.

The Ultimate Fighter 25: Redemption was a mixed bag on television, with a number of fighters stealing the show, but the format continuing to grow stale (more of the same, in other words). Likewise, the finale on July 7, a day before UFC 213, also at the T-Mobile Arena in Las Vegas, feels like something of a hodge-podge card. The main event features the hotly anticipated debut of former WSOF lightweight champ Justin Gaethje, and an Ultimate Fighter: Nations champ on the rise, but outside of that, there’s little to get excited over beyond the finale itself. The card does serve as a nice warm-up for UFC 213, mind you.

Still, it’s one of the two cards that make of part of this year’s International Fight Week (wouldn’t UFC 214 have been a better fit though?), and the actual finale of The Ultimate Fighter 25: Redemption could be a good one, with Jesse Taylor taking on Dhiego Lima.

Watch? Don’t watch? Well, that’s up to you, but lets take a look at what’s on deck for The Ultimate Fighter 25 finale.

Opening the main card after the night’s preliminary fights is a light heavyweight fight between Jordan Johnson (7-0) and Marcel Fortuna (9-1). This is very much a prospect fight, with both men having exactly one fight, and one win, in the UFC. In other divisions, you’d find this bout on Fight Pass, but the 205 pound division is shallow as a wading pool at this point, and the UFC needs to produce a star or two.

What that means is, the promotion will continue to place light heavyweight bouts featuring prospects on main cards, hoping a couple will prove exciting, and catch on with fans. There’s nothing wrong with that approach, but it’s way too soon to determine what the ceiling is for either Johnson or Fortuna.

Johnson, with his undefeated record, enters the fight off a win over Henrique da Silva in Denver this past January. He also happened to serve as RFA’s final light heavyweight champion prior to that promotion merging with LFC to become Legacy Fighting Alliance. He’s gone to decisions in his past two fights, but prior to that was a finishing machine.

Fortuna, meanwhile, stopped Anthony Hamilton in a heavyweight bout at UFC Fight Night 104 earlier this year. That Performance of the Night knockout made a big impression, and he’ll now be dropping back down to light heavyweight to continue his UFC career.

The Ultimate Fighter Nations: Canada vs. Australia winner Elias Theodorou returns and takes on one of his most notable opponents to date in Brad Tavares.  Theodorou is on the cusp of breaking into the top fifteen in the middleweight division. Tavares, at twenty-nine (the same age as his opponent), has been a staple of the promotion for the past seven years. In short, this is one of the more compelling fights on the Ultimate Fighter 25 Finale card.

Theodoreau (13-1), a native of Mississauga, Ontario, enters the night on a two fight win streak against Sam Alvery and Cezar Ferreira. The popular middleweight (his Twitter is generally a must follow) experienced his only loss as a pro prior to that, dropping a decision against Thiago Santos. In fact Theodoreau’s biggest issue to date has been finding the finish in the octagon. In particular, fans (and no doubt the UFC) were unimpressed with his approach to the Alvey fight. As as many have since learned (how’s the WSOF/PFL, Jared Rosholt?), not all wins are created equal.

Still, Theodoreau is a promising talent at middleweight. As is Brad Tavares, with the main distinction being that in the few times he has been given a step up in competition, Tavares has been knocked back. Tavares (13–4) is coming in off a split decision win against Caio Magalhães, but is 2-3 is his past five bouts. The great big asterisk, however, is that his losses include names like Yoel Romero and Robert Whittaker. Otherwise known as two guys fighting for the title the day after Tavares meets Theodoreau.

The Canadian can be a flashy, creative striker early, but tends to slow as the rounds progress. Tavares, astonishingly, has just one finish in the UFC, over Phil Baroni in 2011. This fight feels like it could go either way, but it’s a huge opportunity for one fighter to make a statement.

A week ago, this was an exciting light heavyweight bout between The Killa Gorilla, who had been rushed into a fight against Glover Teixeira too soon, and Canadian former hockey enforcer Steve Bosse, known for his stand-and-bang style. It had fight of the night written all out of it, or at least Knockout… sorry, Performance of the Night.

While we could still get all that, Bosse was forced off the card, and newcomer Nick Roehrick (7-0) gets the nod as a very short notice replacement.

There’s no real way to anticipate what we’re getting with this bout. Cannonier (9-2) will be a heavy favorite, but so will anyone who isn’t making their UFC debut on just a few days notice. Roehrick turned pro a few years back, has fought for Legacy FC and Combat Nights, and is pretty much an unknown quantity at this point. It’s doubtful we’ll have a chance to really measure his skill set with a fight this short notice, but we can still hope for something fun.

Marc Diakiese is a Congolese Brit who has been one of the nation’s more promising exports of late, and he’s putting his undefeated record on the line against Drakkar Klose, who is also undefeated at 7-0-1.

Diakiese (12-0) is the fighter to watch here, but regardless this fight has been booked as a litmus test to see where both men stand. Diakiese is someone the promotion could presumably slot in a co-main event on a Fight Night card overseas if he continues his current run.

Klose, meanwhile, won his UFC debut at UFC Fight Night 103 in January against Devin Powell. Now that the octagon jitters are a thing of the past, it should be interesting to see how he fares against the Diakiese hype train.

Besides having Joe Daddy battling for the Ultimate Fighter 25 contract, Dhiego Lima vs. Jesse Taylor is about as perfect as a finale as you could ask for. Oh, James Krause was a standout throughout the season, but Lima vs. JT Money? It’s pretty good.

The fun thing about TUF 25 was seeing some of the older guys, and how they’ve grown both as fighters and people. Taylor seems to have come a long way from kicking out the window of a limousine, an act that got him kicked off The Ultimate Fighter 7. For a season titled Redemption, his is the story most deserving of the title. Of course, he’ll have to prove he can do it in the octagon against a tough, focused Dhiego Lima.

This might actually be one of the most promising TUF finales in years. Taylor (30–15), after getting kicked off TUF 7, took a single fight in the UFC, lost to C.B. Dollaway, and was cut. He has since been a staple in the regional scene, amassing a career total of 45 fights. In short, he never went away, just never made it back to the big show until now. At thirty-four, this is really his shot at glory, and he no doubt knows it.

Lima, just hitting his prime at twenty-eight, is another story. The 12-5 fighter had talked about calling it a career if the TUF 25 fights didn’t go his way, but it feels like there’s still a lot left for him. The younger brother of Bellator MMA welterweight champ Douglas Lima, he has a ton of potential.

Whoever wins, this has the potential to be a great fight. Though nostalgia and the storyline makes it hard not to want JT Money to get the win.

It’s hard to think of a better way for undefeated former WSOF champ Justin Gaethje to debut in the UFC than a main event against lightweight Michael Johnson. Gaethje is an exciting fighter who simply does not back down. His style has earned him as many fans as critics, as he has frequently been tabbed as a reckless fighter.

Johnson (17–11) has shown flashes of brilliance over the years, but is just 1-3 in his past four. He’s being used as a gatekeeper here, no question about it. Sure, his losses over that span came to Khabib Nurmagomedov, Nate Diaz, and Beniel Dariush, but he still has a name, and a 9-7 record in the UFC. That’s enough to get him the main event against UFC newcomer Gaethje.

Gaethje (17-0), meanwhile, has been perfect since 2011, and racked up ten wins in the WSOF. He defended his lightweight title there five times, fighting at least twice a year, every year in a promotion that put on about a quarter as many cards as the UFC annually. You know exactly what he’ll do in this fight: come out swinging, and not think of backing down.

This is one you just can’t miss. 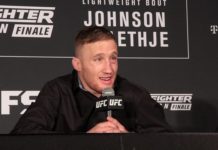 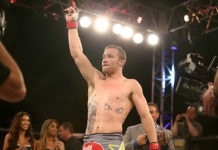 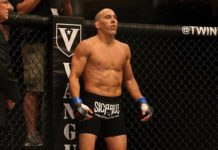